How To Wear Converse High Tops In 7 Modern Ways

This style has literally been cool for a century
Image: The Idle Man
By Luke Sampson

Sneaker releases are now so frequent that describing the flurry of brand new kicks as ‘arrivals’ will no longer suffice, the phenomenon now has its own noun, the ‘drop’. We’re well on board for multiple kick drops (not drop kicks) but truth be told, we always find ourselves drawn right back to old favourites, and there are few styles more well worn by us than Converse high tops.

The brand’s Chuck Taylor All-Star Classic (to give it its full name) has enjoyed an unbroken run of success since the rubber-soled basketball shoe hit the ground almost 100 years ago, and that’s because the iconic design and unmistakable silhouette make for one of the most versatile styles of all time.

“The appeal of a pair of Converse high tops is their ability to complement almost any outfit: the style traverses the gym scenester, the smart/casual blazer guy and even the [classic] lad,” says Chris Gove, creative director of British brand Percival. “Both retro and modern, Converse makes a timeless choice in a minefield of hype trainers and are far more cost effective.”

It’s unarguable that this iconic sneaker style is universally popular, but with so many styling options deciding how to wear Converse high tops is a little trickier. Because we’re nice like that we’ve listed the very best ways to wear them below.

Chinos and Converse high tops have much in common: everyone’s had a crack at wearing them or at least thought about it. If you’ve forged a strong mental connection between chinos and middle aged mediocrity though, a pair of All-Stars is just the thing to ward off charges of tepid dressing.

Standard issue chinos of the ilk your dad might wear won’t do here though: you’ll have to get a bit more menswear than that with a pair that are cropped at the hem. The narrow shape of high tops doesn’t play nice with acres of fabric either, so steer towards fitted styles to keep a sense of balance. Avoid additional pockets, too, as they’ll mess up the clean lines you’re aiming for here.

As chinos sit somewhere on the middle of the smart-casual continuum, a Breton top makes for a solid fence-sitting finishing move. Plus when this French classic is teamed with sporty Converse there’s less risk of becoming some walking Riviera chic cliche. 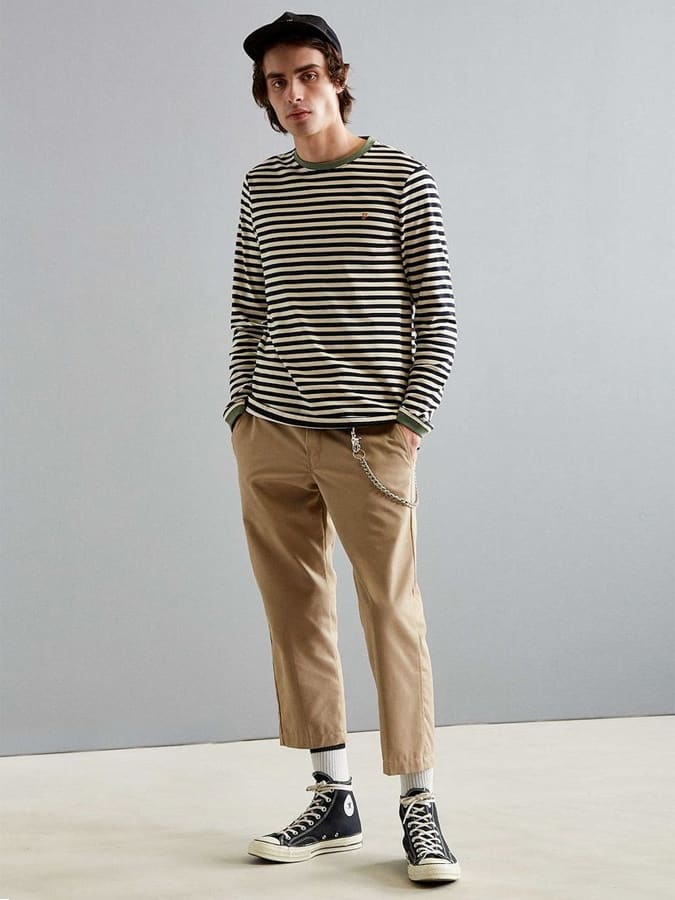 On first reading, high top sneakers and shorts worn together sounds like territory into which no fully grown man should travel. Inexplicably, the combination works, and it works damn well. In fact, swapping a pair of weary plimsolls for a some box fresh Converse high tops is a good way to stand out when everyone else is playing it safe in the sun.

When wearing these northwards-creeping sneaks with shorts work to the rule of opposites: if you shorts are dark choose light Converse and vice versa. Then, to knock any sneaking suspicions that you’re on school holidays, wear a bold stripe shirt up top rather than a plain tee.

Because shorts are already low on formality, whether you choose light or dark high tops to wear with your thigh grazers, you’ll need to make sure that your kicks are always clean: cleanliness is next to godliness and all that. 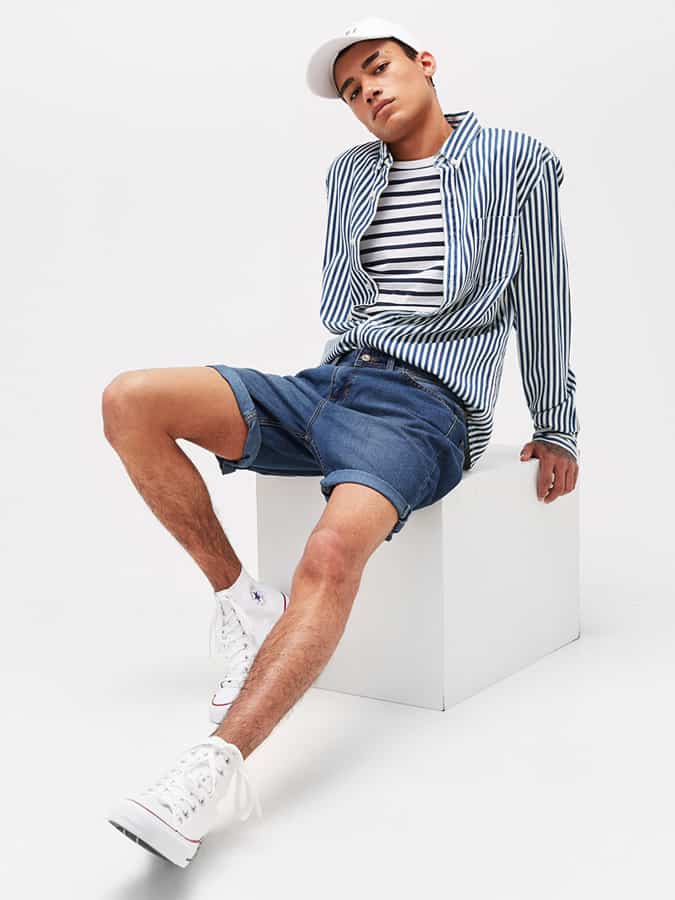 They’re hardly a pair of work boots but Chucks have a sense of everyday utility about them because you can wear them with practically anything. That same utility makes them a particularly good fit with raw selvedge jeans, the holy grail of denim as far as die-hard enthusiasts are concerned.

When these rugged leg coverers are worn with Converse high tops, it’s hard to understand why so many men are still wedded to their skin-tight black skinnies and minimal white sneakers. Raw denim offers a fuss-free masculine appearance, which makes a perfect match for the slimline profile of the canvas classics.

Unlike heavier footwear which will veer too close to Saturday-night-with-the-lads territory, a pair of white Converse will temper any turn-of-the-millenium taste void vibes. A plain sweatshirt on top will keep this collection of basics foolproof. 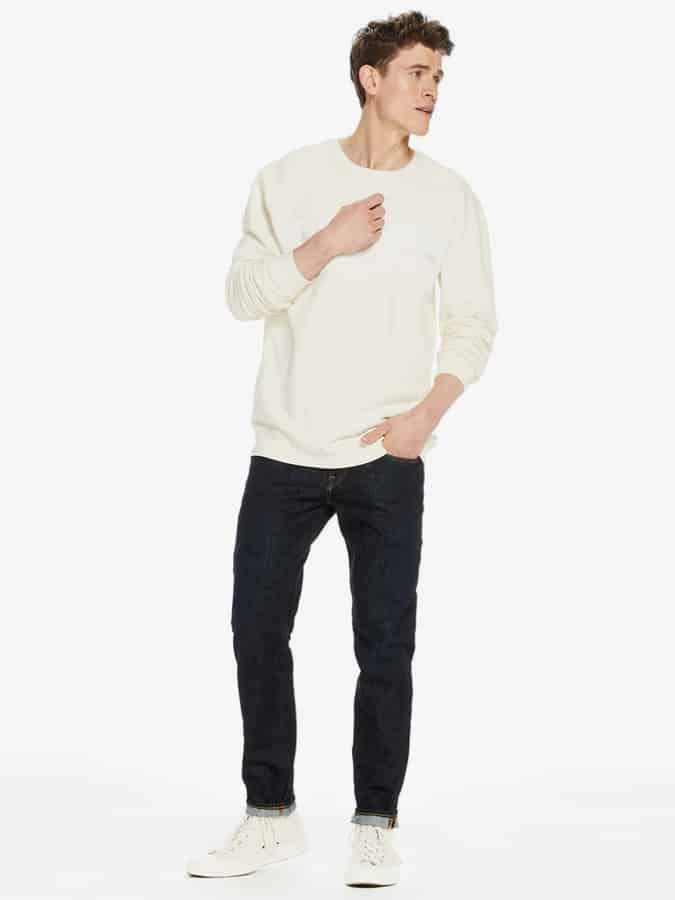 It’s hard to imagine that just a decade ago trainers paired with tailoring was considered sartorial sacrilege. Now, we’re pretty certain that over 90 per cent of the male population has tried some sort of low top trainer with their tailoring by now. So Converse high tops offer a less well-trodden spin on the suit and sneaks look (and you don’t have to look like Doctor Who while you’re at it).

A navy, charcoal, black or green suit will work with white or cream high tops, but in summer, a stone, beige or grey suit will look best worn with a dark pair. Try tonally matching what’s on your torso to your feet to tie the look together properly.

And, unless you’re headed to Comic-Con, avoid doing the TARDIS thing by veering casual with what you’re wearing underneath your suit jacket. A T-shirt, lightweight knit or grandad collar shirt are the safest styling options to go for. 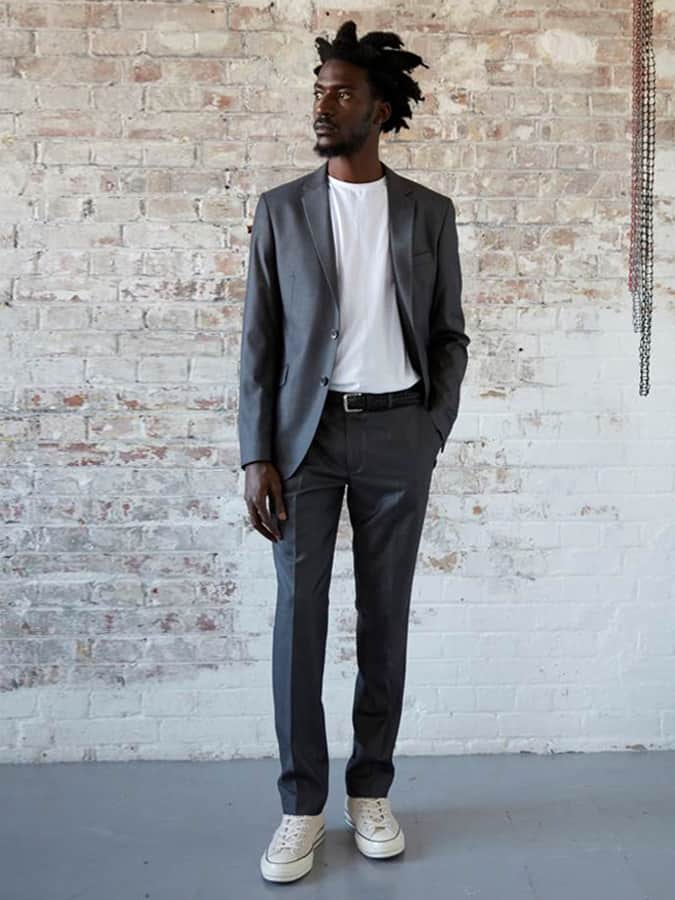 White jeans are about as temperamental as menswear gets. Go skinny and pair them with tasselled loafers and you’re channeling European playboy without the yacht. Introduce some high-top Converse and go relaxed with your cut and you’re suddenly one of those effortless menswear types who’s made a career out of Instagram.

While both dark and light high top Converse will work well with white jeans, the look works best in monochrome. So go all white for the bottom half of your look, then layer darker shades on your top half. Alternatively if pared-back shades aren’t really your vibe a printed short sleeve shirt will work well here, and thanks to your classy choice of footwear you’re less likely to be mistaken for the BBQ tong-wielder-in-chief. This look was inducted into the menswear hall of fame thanks to Marty McFly’s epic turn on a skateboard in Back To The Future. Decades later the combo of light wash jeans and Converse high tops still works as well as ever, though that gilet and checked shirt haven’t aged quite so well.

Wear a white tee tucked into your jeans to riff on those eighties vibes, but try layering a loose worker jacket to bring the look bang up to date. Here fit is crucial too: anything that could could cut off your circulation is not advisable. Instead, a relaxed leg shape with slightly cropped hems works best. 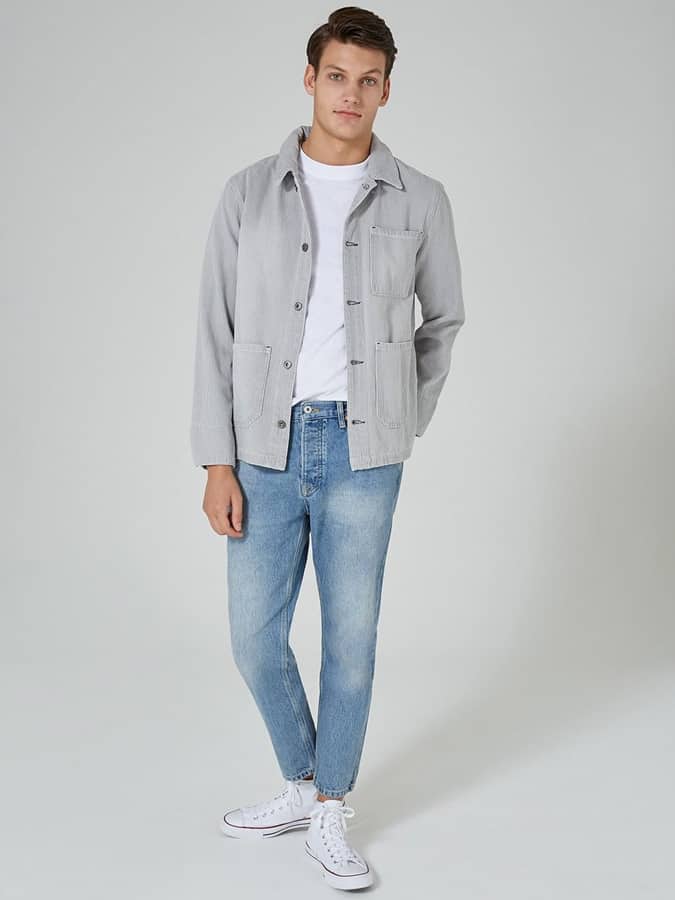 There’s no doubt that we’re in peak sportswear territory which means trainers and tracksuits have toppled suits and smart shoes as the de facto menswear uniform. But, while bold sneakers and joggers may look good in a street style shot, if you’re not an impossibly swaggy sportswear kid, high tops are a safer bet.

Introducing some All Stars into the mix will keep the outfit laid back, but won’t run the risk of you looking like a modern day Sporty Spice. To nod to menswear’s latest sportswear obsession choose side stripe trousers as companions for your Converse and make like Goldilocks: aim for the midpoint with your hems ensuring that they’re neither cuffed nor baggy.

To avoid the full-kit wanker vibes, chuck on a denim jacket and a simple white T-shirt. 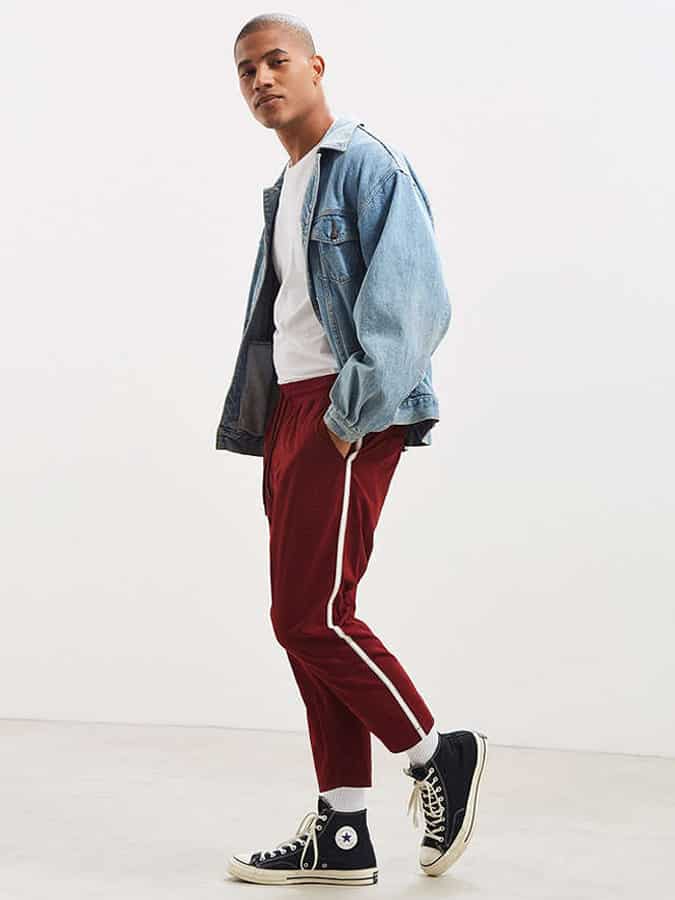 FFS: Leather Trousers For Men Is The Next Big Legwear Trend
4

6 Of The Best Men's Boots Ever Created
5