A Man’s Guide To Wearing Pink

An enlightened man no longer thinks of fashionbeans.com/article/how-to-wear-pink-men/ as something that only comes cut with an A-line hem or replete with buttons that fasten the wrong way around. And yet, it’s still a colour that’s criminally underrepresented in most wardrobes.

“The main worry for guys is that they could look effeminate in pink,” says Mr Porter contributing style director Dan May. “But no colour is off limits. It’s just the way you style it and the confidence with which you pull it off.”

The likelihood is that your wardrobe already has a rosy tinge. You’ve probably got a pink shirt, which you may or may not call ‘salmon’ and break out only for weddings. Tucked in a drawer, there’s a pair of pink socks that you got for Christmas and only air on laundry day. Perhaps there’s a cerise-and-black striped tie that you wear, despite not being convinced you like it, because someone once said it suited you.

And that’s a shame. Because deployed properly – rather than as an afterthought – pink is personality. “Wearing pink automatically tells people you’re a confident character,” says Tony Cook, a stylist who has dressed the likes of A$AP Rocky.

Its absence from most outfits means it stands out in yours and, so long as you pick hues that suit your skin tone and that sit pretty with the rest of your outfit, it’s a statement that flatters.

A History Of Men Wearing Pink

Though these days Barbie’s outfits come in pink and Action Man’s don’t (admittedly, pink doesn’t exactly make for great camouflage), it’s a modern gender split, says May. “Until the 20th century, toddlers of either sex were normally dressed in white, but when colours were used, boys were dressed in pink.”

The thinking was that since pink was closer to red and therefore a strong colour, it was inherently more masculine. It wasn’t until some spurious mid-century neurology was misunderstood to mean women preferred redder tints that Barbie began to opt for the hot pink paint job on her convertible, while Action Man donned fatigues.

The notion of men in pink has oscillated in and out of acceptance ever since. In the shape of a pink Oxford shirt, it’s become a preppy staple. For fans of the blazer and pocket square, it’s a summer look seemingly impervious to trends. It has even influenced the football casuals crowd, who would reach for pink polo shirts to stand out on the terraces.

And now, as nostalgia reigns supreme and sportswear-clad subcultures’ styles swing back into fashion, pink is once again a look worth tapping. Here’s how.

Why Men Should Wear Pink

There’s no better sign of a confident man than one clad in pink. That’s right, I said it. It takes guts to be a guy wearing pink, and takes confidence in your masculinity.

But beyond looking bold, pink is a great color to have in your wardrobe. It looks dashing with both denim and khaki, and can seriously compliment formal dress (pink tie, pink pocket square, even a pale pink dress shirt).

It’s a solid deviation if you need a light color that isn’t white, and is eye-catching, to boot.

Overall, men should wear whatever they like and are drawn to, the color pink included. Plus, if we go back to its origins, it was once considered hyper masculine anyways… It’s time to reclaim pink from Barbie and integrate it more comfortably into the male closet.

The key to making pink men’s clothing work for you is ensuring it’s the right one. “Picking the wrong shade can wash out your skin tone and work against your complexion,” says Cook.

As with so much in fashion, you need to work in opposites. “For paler skin, a stronger, deeper tone works best. A pale or pastel pink, the kind usually associated with Oxford shirts, complements a post-holiday glow and darker skin.”

But that doesn’t mean men with Ron Weasley’s complexion should reach for fuschia tailoring. “You can’t really wear a great deal of pink if you’re very light-skinned,” says May. “It will wash you out. A lot of sartorial rules can be broken, or at least bent if it’s done in the right way, but that one’s for certain.”

Colours That Work With Pink

Every colour has a Morecambe to its metaphorical Wise. For camel, it’s navy; for green, it’s grey; and for pink it’s no different. While a whole range of hues is up for grabs, rogue tones look best alongside darker blues and browns, but can also pair with white for a striking high-summer statement.

Men Wearing Pink: How To Get It Right

Though all men should wear pink, the way you go about donning this color will greatly impact how you’re perceived.

Here’s how to get your look just right by throwing some pink into the mix:

Pink As An Accessory

Aside from picking the right shade, wearing pink requires steely self-esteem. If you’re more of a shrinking violet, experiment with smaller, subtle pink men’s clothing pieces that are worn away from the skin such as a pocket square or a flash of pink sock. Contrary to popular belief, you don’t need to restrict wearing pink to the summer months. In winter, rosy layering pieces offer contrast, peeking out from underneath heavier outerwear, and will inject some colour into wardrobes that have a tendency to steer as sober as the colder seasons’ cloud-bruised skies.. Despite appearing punchy, pink won’t struggle to slot into what you already wear. In tailoring, it plays especially well with other traditionally masculine colours – there’s a reason the salmon shirt and navy suit has become a modern power dressing staple. Grey also works well in formalwear or, for a more contemporary approach, black and pink together nod to the grunge trend. Suggesting that anyone wearing pink needs to ‘man up’ is a little too old hat. (Just look at Drake.) However, putting the colour to work on rugged workwear pieces such as bombers, denim jackets and sweatshirts – is an easy way to guarantee you get looks down the pub for all the right reasons. 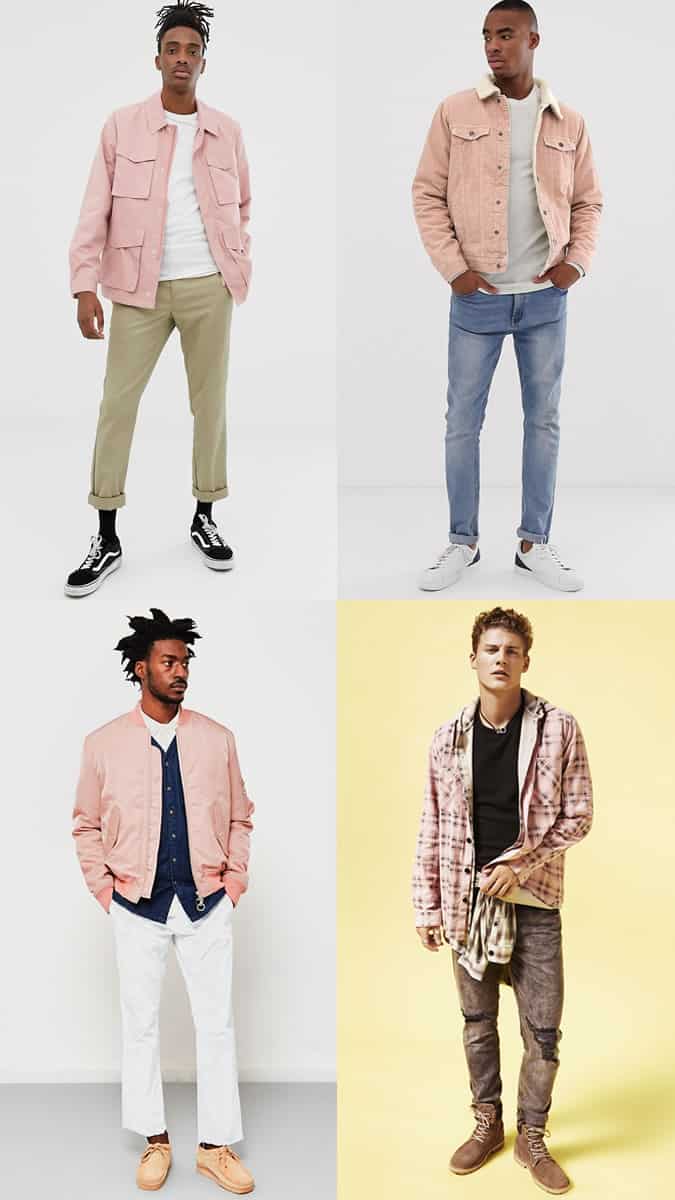 If further proof that you should be dressing like My Little Pony was needed, take it from pink’s infiltration of the streetwear world. A fuchsia velour tracksuit is probably (read: definitely) a little too Paris Hilton circa 2003 but hoodies, windbreakers and sneakers bags are all fair game for building a fire ‘fit. Given its ability to pair expertly with darker tones like blue (as in, the colour of those jeans you wear almost every day) a casual Oxford shirt is an extremely smart buy. Use the button-down to lighten up an otherwise sober look by opting for a brighter example shade or keep things classic and dusty. An easy option for injecting some (much-welcomed) personality into formal attire, a pink tie is a surefire way to prove why blokes can wear blush. Whether for work or a summer wedding, set the knot against a white or even tonal shirt for a look that won’t make you look like a six-year-old girl. Streetwear may have only recently gained the acceptance (or, rather, the appropriation) of the fashion crowd, but it’s long been ahead of the pack when it comes to pink. Commonly used on T-shirts, sweatshirts and hoodies, either in plain pink is something that sits neatly under a denim shirt or jacket. If ever there’s a time to make a splash with pink, it’s while on holiday. Of course, while a decidedly dashing beach choice, the high skin-to-short ratio with swimwear makes getting the shade right all the more important. Especially if your complexion has a tendency to look like Strawberry Angel Delight by day five. In recent years, the world of trainers has been dominated by white, white and, well, a bit of off-white, but mainly white. Now, though, minimalist kicks are making way for everything from retro classics to fluoro-tinged beasts, both of which give a leg up to pink pumps. Pair with dark trousers such as raw denim or grey joggers for added pop. 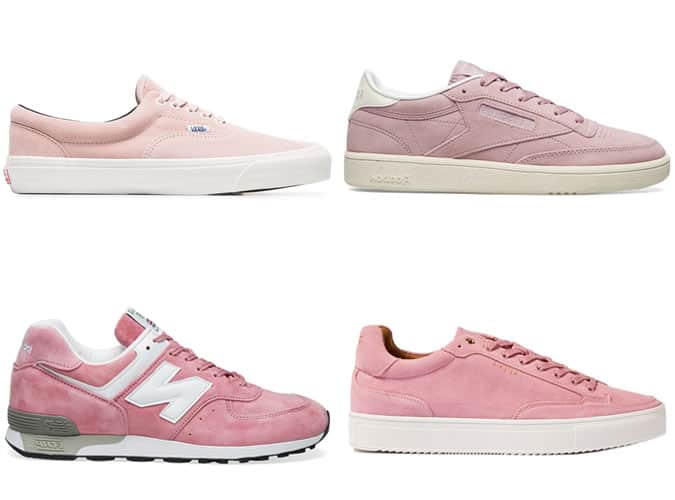