Your layering game can be impeccable, your sneakers box fresh and your outerwear on-point, but it will all be for naught if your hair won’t behave.

Of course, simply wandering into the barbers with a tear-out of David Beckham won’t fix a double crown that leaves you looking like you styled your hair by sticking your finger in a socket.

Instead, you need to deploy the right tools to whip the wildest manes into line. To find out what you’re fighting against, and the best fix, we tapped London’s best barbers to guide you through the follicular fog.

The cow’s contribution to your look should be as a jacket, not a hair stylist. These swirls of hair grow against the direction you want to style it in, creating the whorls that cow’s tongues imprint on their calves, and which stick up when everything else lies flat.

Though most common at the crown, they can appear anywhere to taunt your hair wax’s claimed effectiveness.

The Fix: Go With The Flow

Slicking on hair products won’t help, so know when to beat a tactical treat. “Choose the right hairstyle to embrace the natural direction of your hair,” says Ruffians creative director Denis Robinson. If your cowlick sticks up from the back of your head, a switched-on groomsman will cut it short, then sweep the hair in that direction.

“It all depends where your cowlick is,” says Robinson. “If it’s at the crown, ask your barber to keep more length there to help weigh it down. If it’s the front that’s unruly, a longer fringe has the same taming effect. If you’re more Vin Diesel than Poldark, a buzz cut is equally effective.” The Problem: Unruly Side Parting

You spent the weekend bingeing on 1920s period dramas, and now you’re convinced a Great Gatsby side parting is just the dapper touch needed for your new smart-casual ensemble.

So why, then, is your hair refusing to play ball, old sport?

One of the main problems with upended and abandoned side partings is that your hair is not supposed to bend that way. “Ensure you’ve found your natural side parting by trying both sides and seeing which sits most naturally,” says Robinson,

Another key could be that the lengths between side and top are uneven, creating a fan effect as your shorter hair tries to cope. Once both are fixed, use a hair dryer blast wet hair into place to part your barnet like Moses. Though that bit at the top of your head which always seems to grow quicker than the rest of your hair isn’t uncommon, it’s no less annoying.

Uneasy lies the head that wears a crown, particularly when trying to achieve a slicked-back style or when rogue hairs stick up to ruin your look.

The Fix: Taper Your Do

Take advantage of the crown’s growth speed and taper towards the back. “If you are growing out the front section of your hair, ask the barber to leave it longer there and gradually go down to a shorter length at the crown,” says Robinson.

You might still get some sticking up, but because there’s more volume at the front, you’ll look even all over. And it’s looks that count. The Problem: A Patchy Beard

Follicular woes aren’t limited to the top half of your head. In fact, few things can put a patch on your style like sporadic facial hair.

Largely the result of bad genes (we’ll wait here while you call your dad), few things can be done to fix a patchy beard, but you can disguise it with a little know-how.

The most common places for patches are on the cheeks or under the neck. If you can’t grow the hair out to hide them, get creative with the clippers. “Try tapering down from the cheeks so the lighter hair becomes part of the beard,” says Matthew Hughes, owner of Idris Barbering Co. “Do the same on the underside, instead of a hard line exaggerating the gaps, softly taper out.”

If neither of those work, consider a short stubble beard à la Tom Ford and Jason Statham, as this minimises the contrast between the hair and hair-not. 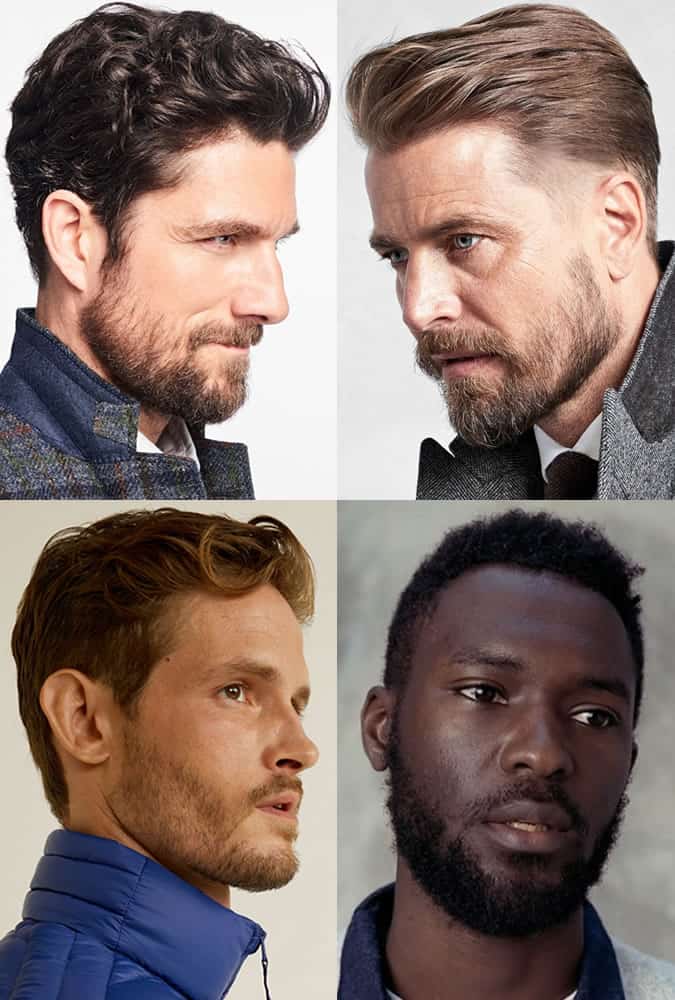 The hair of choice for those considering a career as a Bond villain, the widow’s peak is V-shaped growth of hair usually found at the centre of your hairline. It’s naturally occurring but can also happen occurs when the hairline starts receding on either side.

Though barbers might offer a handful of different options to make like Eddie Munster and embrace the widow’s peak, all agree that shaving it off is not the answer.

“If you have a widow’s peak, side partings with shaping at the front to enhance the volume in the fringe are best,” says Jamie Stevens, three times British Men’s Hairdresser of the Year whose clients include Leonardo Di Caprio and Hugh Grant. “Equally, a middle part works when the hair is long around the face.” You win some, you lose some, as they say. However, beyond a certain age it can feel like we men suffer more losses than gains, with testosterone, skin elasticity and hair all on the decline past 30.

Though by the age of 50 male pattern baldness takes hold of half of all male heads, if you’ve not quite reached Trump-level tresses yet, there’s still hope.

Before you go at your bonce with a Bic, consider if a different cut could be the answer. “For thinning hair, it’s best to try a shorter, more textured style to maximise volume and create the illusion of thickness,” says Murdock London senior barber Ben Vowles.

To make the most of your new ‘do, avoid wet hair products which can cause the strands to stick together. “Matte finishes such as sea salt spray and texture paste are best for achieving this as they allow the hair to appear fuller.” The Best Weekend Getaways For Every Type Of Traveller
4

The Best Sustainable Fashion Brands In The World Right Now