They say life begins at forty, but that’s not usually the case when it comes to fashion. Forty is the age when you swap sneakers for square-toed brogues, when your slim black jeans become bootcut and unnervingly blue, and when the fit of your shirt gives way to a rapidly swelling paunch. Or so we thought.

As men have become increasingly style-conscious over the last decade or two, a select set of old-timers have begun to consistently knock it out of the park when it comes to their sartorial choices. These are your style uncles, and they’re here to teach you some important lessons on how to dress well, whatever your age.

Goldblum may be way past 60, but he doesn’t seem to have noticed. The inimitable old-timer isn’t afraid to wear something that you’d more often see on someone a third of his age, and he always looks damn good when he’s doing it. The key? Sheer, unbridled confidence. And a killer pair of shoes.

“He exudes a certain level of confidence without being cocky, and his shoe game is amazing,” says style consultant Geoff Cooper. “He might wear Converse, or he might wear some crazy black-and-white loafers, or he might wear a white patent leather statement shoe.” That’s not to say he doesn’t stick to trends up-top, though. “He wears a lot of turtlenecks, and any man who doesn’t look good in a turtleneck has something mortally wrong with them.”

Another Goldblum classic is a printed shirt, something which – if you’re not Jeff Goldblum – can make you look like you’re queueing up for the buffet on a cruise ship. If you’re not quite ready for the ‘full Goldblum,’ it’s all about moderation. “Just tone it down,” says Jade McCarthy, senior stylist at The Chapar. “If you’re afraid of print and colour, play with texture – you can still wear a navy outfit, but wear a navy outfit that’s got a waffle stitch to the jumper and chinos made of moleskin.” 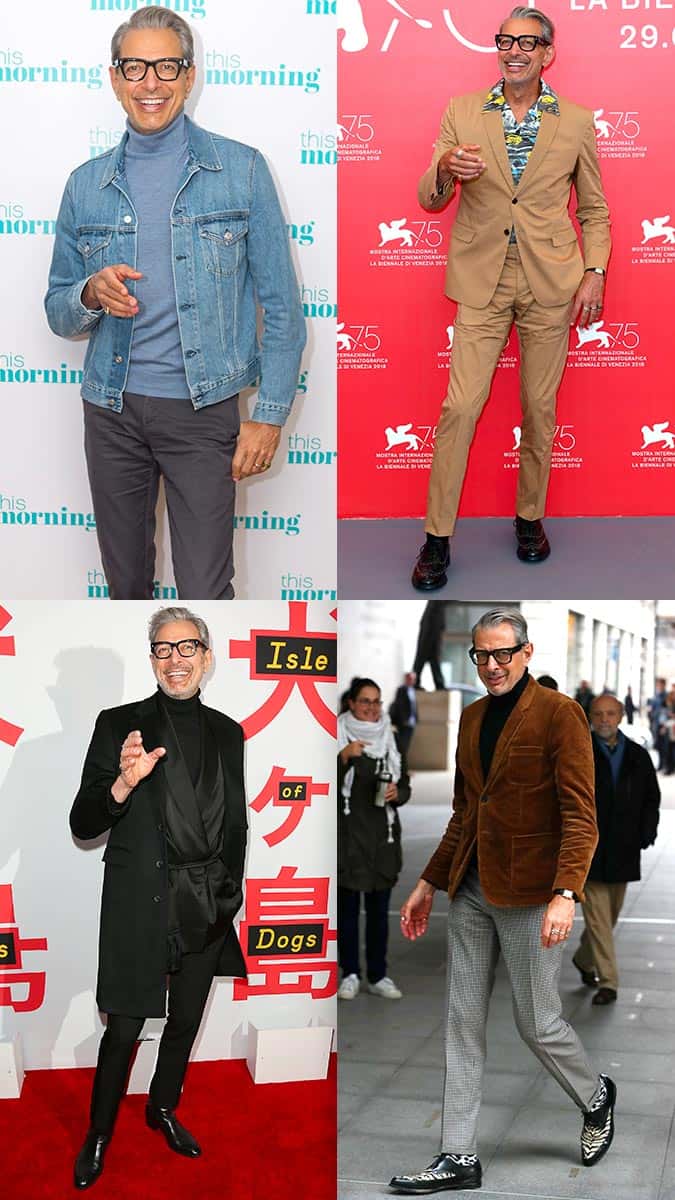 No-one ever expects Martin Freeman. The everyman of The Office, who’s perfected his unassuming-bloke-taken-along-for-a-ride schtick in everything from The Hobbit to Black Panther, has been crafting a solid style foundation for years. He’s a subtle fashion guru, partial to some comfortable workwear when he’s off-duty, but his fashion credentials are more about his ability to downplay his dad rock sensibilities.

“He’s got a little bit of the Gallagher vibe, actually,” McCarthy says. “He has that mod style. I wouldn’t be surprised if he’s got the odd thing from Pretty Green, Liam’s brand.” That means crisp tailored separates, penny loafers and well-judged use of patterns, from checks to paisley.

It’s bringing a dash of that mod mentality to his suiting – often bespoke from Mark Powell – which really makes Freeman stand out from the crowd. “Sartorially he’s really solid in his choices, but he plays around with fabrics as well,” Cooper says. “He doesn’t just wear black and grey suits. You’ll see him in a houndstooth, or a check. It’s always something different.” ‘Uncle’ might not be the first word that comes to mind when you think of the gravel-voiced Luther star, but don’t let appearances fool you – Elba is nearing 50, a fact he keeps well-hidden by staying in shape and in excellent smart and casual outfits. Although, for a future James Bond, he prefers jeans to dinner jackets.

“He has an ever-so-slight hint of a street vibe coming in, which makes sense seeing as he’s a DJ as well,” McCarthy says. His look mixes sportswear, tailored pieces and heritage fashion (he’s in the ultra-exclusive club of men who look good in flat caps) and the reason he pulls it all off is that nothing is too out-there.

“He’ll wear quite simple things, then accessorise with high-top trainers, chain necklaces or blacked-out sunglasses. It could be quite easy for someone like Idris to look like mutton dressed as lamb, but he pulls it off well by keeping the rest simple.”

As for flaunting his famous physique, Elba’s secret weapon is the humble jumper, usually in a dark, unpatterned neutral. According to Cooper, that’s flattering for men of all shapes. “A jumper that fits your body is a go-to garment,” he says. “It should fit you in a way that doesn’t draw focus to your stomach and will finish your outfit off perfectly.” Whether it’s his creepy Lovely Bones combover or his garish satin Hunger Games suits, the chameleonic actor might not seem like the most obvious style icon. Off-screen, however, it’s a different matter. Tucci is a master of classic tailoring, and he’s rarely seen without an immaculate blazer and his textbook horn-rimmed glasses.

He’s rarely seen in a T-shirt, and even when he is, it’s a smart one with a blazer over it, says McCarthy. “He gives off quite an Italian chic kind of vibe – he’s usually in a shirt, and he’ll often wear a white or beige blazer with navy chinos, or vice versa. You can just imagine him on a boat in Italy with a glass of prosecco in his hand.”

To inject your own look with some of Tucci’s riviera influence, Jade recommends keeping it coordinated. “His colour palette is very minimalist. If I was to open his wardrobe, I would expect to be able to just instantly pair everything together.”

Tucci also teaches an important lesson in fashion for the “follicularly challenged,” as Ruffians barbershops creative director Denis Robinson puts it. “My advice for men with short hair is to go to Cubitt’s and get yourself some new glasses, something with colour,” he says. “That’s what Tucci does. When you’re bald, your face is your canvas, so he paints a different one every day: with glasses, with hats, with scarves, or with facial hair.” Rock stars don’t always age gracefully, especially when they refuse to give up their trademark ‘look’. And while Noel Gallagher might not be a fashion designer like his brother, it’s his conservative approach to those Oasis glory days that have earnt him a spot on this list. That, and the fact that he can wear a leather jacket at 50 without looking like Richard Hammond.

“He has a uniform style foundation on which he builds and adapts all of his outfits,” says Henry Graham, creative director at Wolf & Badger, a destination for premium indie brands. “In this case, it’s layering casual jackets over shirts. He’ll then use accessories or statement apparel which amplifies the rest of his outfit and creates an instantly identifiable ‘look’.”

Casual shirts and cropped jackets – Harringtons, bikers, suede truckers – are what Cooper calls the “Noel Gallagher 101,” and because they’re usually in easy-to-wear dark neutrals, you don’t have to be a rockstar to pull them off. “If you’re not into being super bold, just get a denim jacket and wear it with a basic shirt, T-shirt or polo,” he says. And to avoid Top Gear vibes, look to your cuffs. “If you love the fit on the body but it’s five inches too short on the sleeves, don’t buy it.” If Carell’s style journey from The 40-Year-Old Virgin to bona fide silver fox seems like the plot of a Hollywood comedy, it’s because it is one. In Crazy, Stupid, Love, Carell goes from schlubby suburban dad to haute couture hunk with the help of Ryan Gosling and some properly-tailored jackets. In real life? Well, you can probably guess.

“Steve Carell was born to be the age that he is right now,” says Robinson. “He’s become more elegant, and he clearly spends more money on his clothes.” And it seems Gosling’s admonishment that he wears the wrong-sized jacket hit a nerve. “Nowadays his suits are tailored, whereas 15 years ago they were a bit more off-the-rack. And while he’s not as playful as Jeff or Stanley Tucci, he can throw in a tie that you wouldn’t expect with certain outfits.”

The grooming is really helping the Carell cause at the moment, as well. The salt and pepper facial hair is a Clooney trademark, while he also seems to have copied Gosling’s hairstyle. Accompanied by tailored casuals like polo shirts and bomber jackets in staple navy, it’s a look that works as well for the red carpet as The Office. The Best Hairstyles For Men With Thick Hair
3