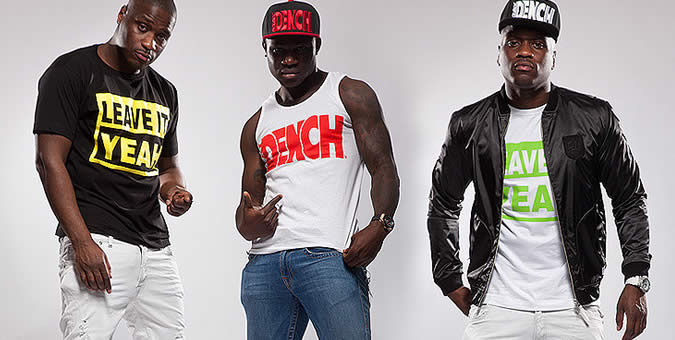 Giving the commercial fashion market its new mantra, Stay Dench offers a range of easy to wear separates for your casual wardrobe.

The brainchild of UK rapper Lethal Bizzle and Arsenal midfielder Emmanuel Frimpong, ‘Dench’ began as slang for ‘great’ – and after Lethal Bizzle using it in his songs, media interviews and social media, it quickly caught on in urban and sports culture.

The enterprising duo launched the ‘Stay Dench’ fashion label in 2012, and what started out as a hoody emblazoned with the eponymous slogan has now become a range of t-shirts, sweatshirts, trousers, caps and accessories. The Stay Dench mantra has also evolved, leading to play on word phrases like ‘Keep calm and Stay Dench’ and ‘Dench Gang’.

Since its launch in 2012, Stay Dench has garnered a celebrity following that includes footballers Ian Wright, Djibril Cisse and Jack Wilshere as well as rapper Chip (formerly Chipmunk), radio presenter Greg James and the label’s namesake, Dame Judi Dench herself: In October 2012, during his Radio one show, Greg James quizzed the Oscar-nominated actress about her awareness of the label, to which she replied, “Yes I know about this. I certainly do and if he’s listening I’d quite like one of those shirts. My grandson has one.”

Greg then presented her with her own Dench gear, including a Union Jack Dench t-shirt. “Oh my goodness I’m drunk with power,” said Dench. The Bond actress then went on to say how she planned on getting her entire family ‘Dench Gang’ t-shirts for Christmas.

The popularity of Stay Dench has not gone unnoticed, with retail heavyweights like Selfridges quickly snapping up the brand for its stores.

Stay Dench is available now at Selfridges and Staydench.com. Show your allegiance to the cult movement with the Stay Dench ‘Dench Gang’ t-shirt. Dame Jude has one, that means you should too: The slogans have expanded to include Lethal Bizzles’ other material, including the title of one of his latest tracks, ‘Leave it Yeah’: You can also pick up Stay Dench embroidered baseball caps: And in honour of Dame Judi, here’s me working my Stay Dench classic t-shirt: