How To Avoid Getting Fat This Christmas

Don’t limit yourself this festive season. Take a realistic approach to overindulgence, instead
By Max Anderton 19 December 2016

You’re supposed to overindulge at Christmas. That’s the point. But that’s not to say you have to kick off the new year with enough newly acquired blubber to start a soap factory.

Be smart and you can enjoy the festive period almost as much as that, ‘Ah come on, it’s CHRISTMAS!!!’ character Harry Enfield used to do, without having to punch new holes in your belt. And don’t worry, we’re not going to dish out any Scrooge-worthy advice such as swapping chocolates for nuts and seeds, or going tee-total. We’re not stupidly unrealistic, after all, and neither are you.

So, here it is: the guide to enjoying Christmas without getting fat (or being painfully boring).

“Over Christmas, the average Brit sips, gulps and downs around 40 per cent more alcohol than normal,” says nutritionist Zoë Martin of Discount Supplements. Which can dramatically lower our inhibitions, not only making cracking on to Susie from HR at the office party seem like a great idea, but also making us eat like no one’s watching.

Zoë’s advice? “Drinking slows your metabolism to a crawl because the body deals with alcohol before anything else,” she says. “If you know you’ve got a night of drinking ahead then eat a good-sized, low-sugar, low-fat meal before you go out. As well as making you less likely to inhale a takeaway later on, it ensures fat and sugar stores aren’t being left to turn to fat while the alcohol you’ve consumed gets priority treatment in the metabolic queue.” There are some simple ways to reduce your Christmas calorie intake without eschewing the festive gluttony altogether. The easiest is to choose your booze with care. “Vodka and gin are both good base spirits,” says Max Bridger, co-founder of LDN Muscle. “Use soda water for your mixer, with a little fresh citrus to add sweetness, and you’ll have slashed the amount of calories in each drink down to next to nothing.

“It’s also worth remembering prosecco has less calories than wine, and that there are plenty of lighter, yet still delicious, beer options available nowadays.” Our favourite? It’s a close call between Hoegaarden (147 calories per bottle) and Brooklyn Brewery’s pilsner (155 calories). Really getting on it? Tequila clocks in at only 60 calories per shot. (Just saying…) 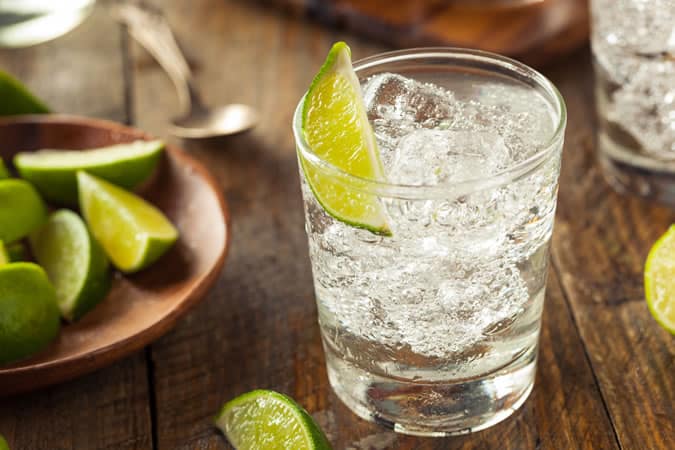 Your mum was right when she told you to have a water between every ‘proper’ drink. “Remember, 70 per cent of the body is made of water, so [it] plays a key role in the body functioning properly,” says Lawrie Gormley, Bio-Synergy ambassador and personal trainer. “Alcohol blocks the creation of a chemical called vasopressin; this means your kidneys send all water straight to the bladder, stopping your body retaining it. That’s why ‘breaking the seal’ can end up with half hourly trips to the urinals.”

Keep topping up with water and not only will your hangover be less horrendous, you’ll feel fuller when drinking and so be less likely to succumb to the lure of the kebab shop. Plus, your body’s functions won’t be so badly affected the next day, giving it a better chance of doing the extra work required to process a seemingly endless supply of Celebrations. We could suggest doing 10 press-ups every time an elderly relative says something questionable about immigration, or holding a plank for the duration of the Queen’s speech. But this is the real world, and ain’t no one doing that nonsense (though completing 30 burpees for every pudding you devour is definitely no bad idea). The truth is, however, no matter what smart consumption tactics you employ, without exercise you will finish the festive season fatter than you started.

“Nobody wants to spend their Christmas break training for hours every day and it would be ridiculous to suggest that you do,” says former professional boxer Matt Goddard. Everyone has time for a 4-minute morning workout, though, right? “Tabata follows the principle of 20 seconds of exercise at 100 per cent effort, followed by a 10-second rest. But 100 per cent really has to mean 100 per cent for it to be effective.”

Proven by BBC’s Horizon to be far more effective for fat-loss than long, steady-state sessions, some researchers reckon high-intensity interval training boosts the body’s production of human growth hormone (one of the main things that aids fat burning) by an insane 450 per cent, for up to eight hours after exercising.

Try doing burpees back-to-back with mountain climbers for a full-body workout that should be enough to prevent those mince pies from getting squatter’s rights to your belly. Chill out, for Christ’s sake! Not only is it fine to indulge your inner glutton every now and then, the stress hormone cortisol is a huge cause of the body storing fat (among various other unhealthy side effects). Trust us, kicking back and truly relaxing is one of the healthiest things you can possibly do this Christmas.