The Breton Stripe Top: In Celebration Of A Menswear Icon

Few things are likely to link French emperors, A-list actors, grunge icons and dads on the nursery run – least of all a top originally used to identify people on sinking boats. Nonetheless, attracting wearers as diverse as these has been one of the Breton top’s most notable achievements.

Once the exclusive preserve of sailors, for the past 150 years or so it has given seafarers and landlubbers alike a dose of Gallic cool, making it an enduring menswear icon that’s more than worth its salt.

Listed by the Museum of Modern Art as one of 111 classic garments that everybody should own, the Breton top is a modern-day wardrobe essential that is just at home worn as part of a casual look as it is under a double-breasted suit. But with many variations available today and an interesting history to boot, there are plenty of questions to ask before you buy your own.

Where Did The Breton Top Come From?

The Breton top’s origins date back to 1858, and the Act of France, when the French navy introduced a white cotton pullover with indigo horizontal stripes as its official uniform. It was practical – in that it was easy to spot if anyone fell overboard, and the wide ‘boat’ neckline made it easier to peel off and wave for help – but it also carried a message; its 21 bars symbolised each of Napoleon’s naval victories over the English. The Breton top sailed into civilian life in the 1920s, thanks to American socialites Gerald and Sara Murphy, who invented the ‘summer season’ on the Cote d’Azur. In 1923, Gerald returned from a trip to Marseille with a bunch of the shirts from a local atelier, and soon the Murphys and their A-list guests – including The Great Gatsby writer F. Scott Fitzgerald and Spanish painter Pablo Picasso – were all sporting them by the pool. Designer Coco Chanel later incorporated the stripes into her nautical-inspired collections, and the Breton went on to lend a little Riviera-inspired nonchalance to everyone from James Dean and Andy Warhol to Kurt Cobain and Jean-Paul Gaultier (who also showcased it on his Le Male fragrance bottle). As Luc Lesencal, chief executive of modern Breton brand Saint James, says: “The Breton is beyond fashion. It’s a timeless classic.” The entry-level Breton top for many guys may not be the purists’ choice, but the striped T-shirt still carries enough hallmarks to get a pass. And, as it looks as cool on Brigitte Bardot as it does on Ernest Hemingway, it’s one of the earliest and most potent symbols of gender parity. The classic Breton top. The boat neck and the extra stripes add that ineffable je ne sais quoi, whether you’re slouching about on the weekend or heading out on a date. Push the sleeves up for an added touch of nonchalance, or tuck it into a pair of pleated trousers if you want to smarten up. A smarter take on the hardy perennial, in a suitably lightweight wool or jersey, allows you to carry the Breton stripe into the evening. As long as that evening involves sipping Negronis on a yacht in San Tropez harbor or, you know, the pub garden. 3 Ways To Wear The Breton Top

The Breton top oozes casual-with-attitude, and is at home within a wide range of casual outfits. The most obvious choice is to pair it with selvedge denim and desert boots, but it works just as well with navy wide-legged chinos and trainers.

Looking back to the icons, original Breton adopter Gerald Murphy was photographed at Cap d’Antibes in the ’20s, his long-sleeve Breton top offset by white shorts, espadrilles and a chunky walking stick; while Picasso, pictured in the ’40s, spiced his T-shirt up with a ten-gallon hat and a revolver, taking insouciance to a whole new level. If your usual benchmark when getting dressed is “what would Cary Grant do?” then you’re in luck. Mr Grant nailed smart-casual Breton styling in 1955’s To Catch A Thief by pairing his reverse Breton – navy background, fine white stripes – with a red bandana.

Modern designers have used the Breton top as a layering piece, with former Burberry boss Christopher Bailey placing it beneath an oversized short-sleeved shirt and tucking it into pleated chinos for a sort of grunge abroad look – a nod, perhaps, to Kurt Cobain’s fondness for the storied stripe. 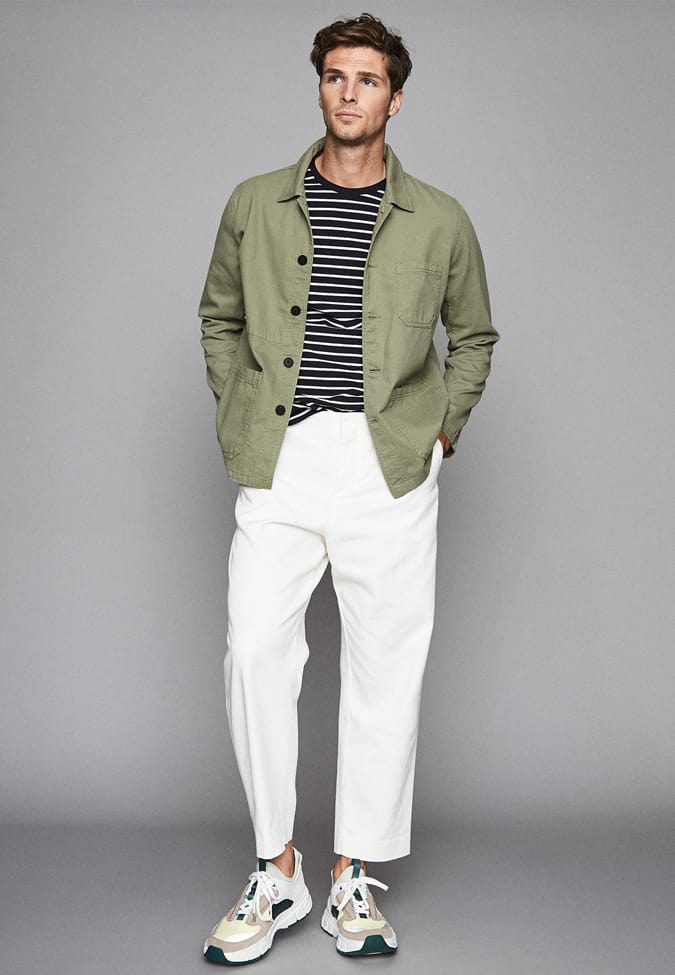 You don’t have to go as far as Scott Fitzgerald, who was pictured on the Cote d’Azur in the ’20s wearing a long-sleeved Breton top with a tweed jacket and plus fours (essentially wide-leg pantaloons that finish below the knee). But it scrubs up surprisingly well, particularly if you take a classic indigo-on-white Breton jumper and wear it over a buttoned-up shirt with grey or navy chinos.

Or simply let your stripes sing beneath a lightweight blazer or a navy seersucker suit, as championed by the likes of Ami and Officine Generale. “It always adds a nice graphic pop to an outfit,” says Saint James’ Luc Lesencal. 5 Of The Best Breton Brands

You want tradition? St. James has its roots in a French village with a thousand-year textile production record. Every month, almost 239,000 miles of wool is knitted in its factory, the vast majority of which is woven into the finest Breton tees and jumpers (they’ve also collaborated with J.Crew and Coach, among others). “We twist our iconic pieces to create modern styles that can stand for many seasons,” says Lesencal. Unimpeachably Breton – it was founded in 1938 in Quimper, a city in the northwest of Brittany – Armor Lux is the last manufacturer of the Breton shirt in the region, and supplements the classic style with ‘mariniere multicolore’ T-shirts (AKA different colors) as well as Breton beanies, scarves, and even slippers. According to the brand’s export manager, Marco Petrucci, “The Breton top fits in with a cool weekend outfit as well as a sportswear look, but even when combined in a rather formal context, it still fits.” Officine Generale founder Pierre Maheo spent his childhood in Brittany, and while his father was a more or less permanently Breton’d oysterman, his grandfather was a sharply suited tailor. Perhaps that’s why among the brand’s collections you’ll see a variant on the Breton tee (sharpened up, perhaps, by a navy/grey color combo) worn under blazers or slouchy suits. “It’s part of my DNA,” says Maheo of the Breton top, “so it’s a thread running through the brand.” A modern take on the traditional Breton top, Arpenteur’s ranges, made in France, add vibrant oranges, yellows, blues and greens into the mix, often on the same garment. The brand’s outerwear offering is another highlight, and it’s known for underrated collaborations with other French mainstays such as century-old footwear brand Paraboot. The in-house of brand of menswear etailer Mr Porter says it is, “inspired by well-dressed men, past and present … and is as stylish as it is timeless.” With those criteria, how could it not produce its own take on the Breton top? From long-sleeve cotton-jersey T-shirts with chunky boat necks to fine-stripe roll-necks, these are elevated variations on the mariniere theme.