8 Fragrances Worn By The World’s Most Stylish Men

Having already read the FashionBeans guides to dressing for your body shape, nailing smart-casual and picking the right tie to wear with your shirt — you have read them, right? — it’s likely you’ve already got your appearance pretty down pat. But it’ll all be for naught if you don’t smell good.

“Manners and a good cologne is what transforms the man into a gentleman,” said Tom Ford, arguably the world’s smoothest man, which goes a long way to explaining why we fuss so much about picking the right one.

It’s no surprise, then, that some of the most best-dressed gents of all time have used a signature scent to take their style game to the next level. They have the ‘knowledge’ and you can too with this whistle-stop tour of the finest fragrances to grace the bodies of your favourite style icons. The word ‘creed’ refers to a system of religious beliefs, which explains the legions of disciples who have worshipped every scent to come out of this perfume house since 1760.

The brand’s story started with a pair of scented gloves that were sent to George III by the then London tailoring company. Its regal fragrances have since caught the nostrils of the reigning king of British menswear, David Beckham, who (as well as his own concoctions) is known to wear Erolfa and Aventus.

The most popular Creed fragrance among the elite, however, is Green Irish Tweed, which is a favourite of Hollywood royalty and permanently well-dressed gents like Robert Redford and Richard Gere. Inspired by the Irish countryside, it’s an expectedly verdant smell with zingy, floral notes of lemon verbena and violet leaves. An olfactory institution, Floris can officially lay claim to being the oldest British seller of good smelling stuff. Founded in 1730, the brand still holds a store on London’s Jermyn Street where it all started nearly 300 years ago.

The fragrance house is mentioned in three James Bond novels including Diamonds Are Forever in which 007 puts purchasing of a Floris fragrance on his to-do list – smart choice. The world’s most famous spy never reveals which particular Floris fragrance had his affections, but it is known that Bond creator Ian Fleming was partial to the classic No. 89, with its notes of zesty bergamot and sweet cedarwood on a warm, musky base.

Bond wasn’t the only British icon partial to the brand. Starman David Bowie wore Floris Elite, a markedly aromatic scent that leans heavy on top notes of grapefruit, while actor Benedict Cumberbatch, best-known for his role playing British institution Sherlock Holmes, is no stranger to a spritz or two. When it comes to the three F’s – fashion, food, and fragrance – the French are undisputed world beaters. At the top of that pile is Guerlain. The luxury French perfume house has been honing its scents for nearly two centuries but didn’t create its first fragrance for men until 1959, and boy was it worth the wait.

The result was Guerlain Vetiver, a blast of freshness that is as evergreen as the bottle it comes in. Opening with a fruity trio of mandarin, lemon, and neroli, it’s long-lasting thanks to a smoky vetiver heart backed up by a strong tobacco base.

All that smokiness has attracted many fine gentlemen including Indiana Jones himself, Harrison Ford, and one of our primary sources of inspiration for ‘60s-style tailoring, Michael Caine. Acqua Di Parma, often referred to as ADP by those in the know, has become a bathroom status symbol, helped along by its Instagram-baiting bottles and aromas that purr with class.

During the 1950s, the Italian perfume house from the town of the same name could count on silver screen legends Cary Grant and Gregory Peck as devotees. Both wore the signature Acqua di Parma Colonia, the very first scent it bottled which later became the definitive fragrance of Hollywood’s golden age.

The potent mixture of lavender, jasmine and light musk combines to create what you’d imagine an Italian garden to smell like and has now been adopted by the new guard of Tinseltown including Bradley Cooper who wore the ADP Barbiere range at the 2019 Oscars. It’s no exaggeration that Aramis broke new ground when it became the first men’s fragrance to be sold at department stores, and it’s still a game-changer more than half a century on.

The scent was first released in 1964 and is characterised as a chypre (sheep-ra), a special grouping of scents widely regarded as the most sophisticated and alluring of fragrance families.

It therefore makes sense to find that the coolest cat in The Rat Pack, Sammy Davis Jr (sorry Frank), would lather it on daily. With a masculine blend of spicy cinnamon and vetiver bedded by that distinguishable leather base, who could blame the Candyman hit-maker for his olfactory obsession? The legend of Eight & Bob began one night in 1937 when Parisien amateur perfume concocter Albert Fouquet struck up a conversation with an exceedingly stylish American student who took a liking to Fouquet’s scent. That preppy dresser was none other than John F. Kennedy who on his return to the States asked if the fragrance connoisseur could send him eight samples of his perfumes, and one for his brother, Bob.

That’s the story of how the 35th president of the United States gave life to one of the most enduring fragrance brands of modern times. It wasn’t long before Fouquet was fielding requests from the creme de la creme of Hollywood’s leading men, from James Stewart to Cary Grant.

The main note of Eight & Bob is kept firmly hush-hush but is believed to come from a rare plant Fouquet discovered on a trip to Chile. The smell is French sophistication bottled up – light, a little bit woody and supremely seductive with its botanic notes of violet, iris, and sandalwood. 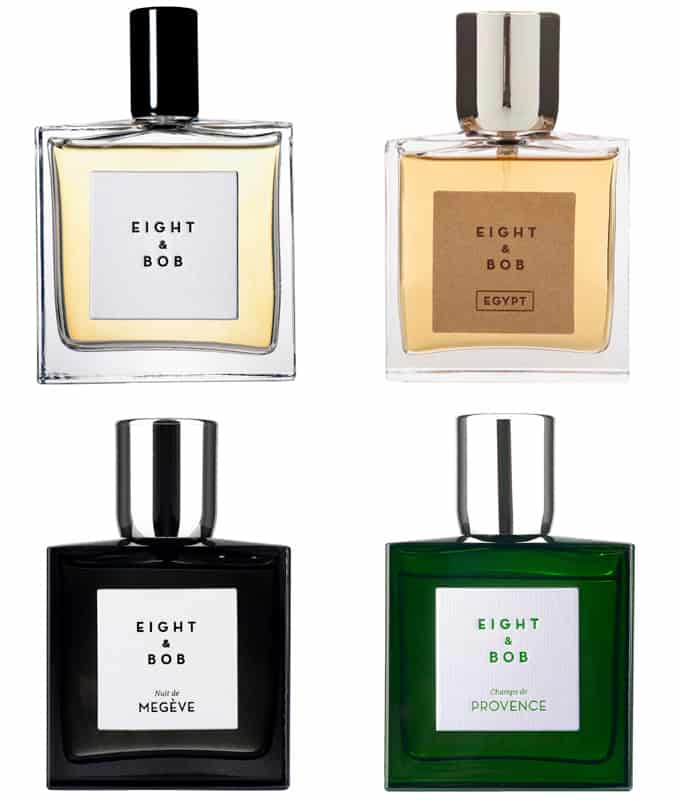 Another fabled fragrance house in the canon of French perfume history, Caron was founded in 1903 by Ernest Daltroff: a man with no formal perfume training, just an exceptional nose with which he could put together some of the best scents known to man.

Take Pour Un Homme De Caron, for example, the first eau de toilette specifically marketed towards men on its release in 1934. It runs off a relatively simple, but charmingly effective blend of lavender and vanilla.

Among the multitude of fans Caron acquired down the years was Hollywood cultural cornerstone and owner of the best Harrington jacket there’s ever been, James Dean, while French lounge lizard Serge Gainsbourg liked it so much, he wrote a song about it. Fragrances by Carolina Herrera have been a by-word for elegance ever since the Venezuelan fashion designer was hanging out with Andy Warhol and Mick Jagger at New York’s Studio 54.

In the early nineties, the label launched its first men’s fragrance, Herrera for Men, and it’s still the leader of the pack with a classic medley of bergamot and rosemary as the top notes, followed by sweet and spicy cloves in the middle and one of the best tobacco bases around to finish the scent off.

It’s not a fragrance you’d immediately peg to the scumbro stylings of Justin Bieber, but the hitmaker is a loyal wearer of the enduring aroma. His wife Hailey Baldwin, an ambassador for the brand, might have had a little something to do with that. How To Dress Sustainably (And Stylishly) In 2020
9

Do Women Actually Like Beards? We Asked The Experts
10