Foods That Give You Energy For Every Type Of Goal

When it comes to ‘energy’, most of us can admit that we don’t know too much beyond ‘calories = fuel’. But, of course, not all calories are created equal. A Mars bar, for example, won’t help see you through an early morning gym session in the same way that a bowl of porridge would. Likewise, a sneaky Haribo might be just the ticket if you find yourself faltering midway through a half marathon, while a crisp bread may well slow you down (not to mention being somewhat impractical six miles in…)

With that in mind, we decided to explore just what ‘energy’ means, and which different foods provide the best type of energy in certain situations. Luckily, some of the best nutritionists in the business were on hand to help us out.

What Are High-Energy Foods?

Generally speaking, all food is a source of energy, providing your body with vital fuel to perform even the most basic bodily functions. That doesn’t mean a fistful of sugar is your best bet, however. “Not all food is created equal,” says Wiener. “There are certain types of foods and food groups which can provide you with more energy than others. The best and most energising foods are complex carbohydrates, proteins and fibre which take longer for the body to break down, resulting in sustained energy which can be used throughout the day.” 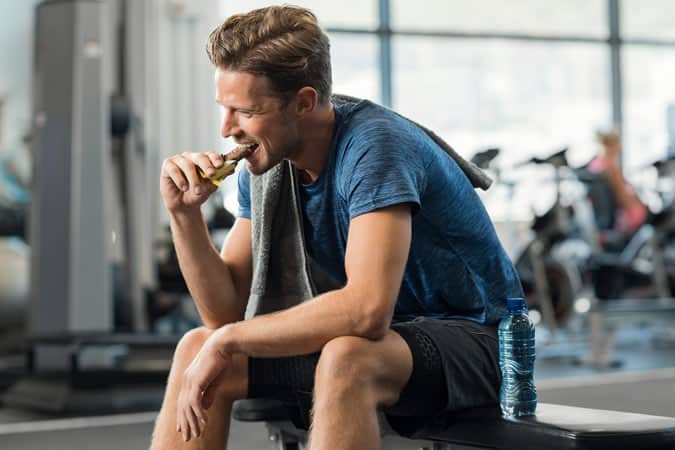 Travers breaks it down further: “Energy is measured in calories, and almost all foods contain some, either from carbohydrates, fat, protein or even alcohol,” she says. “Although fat is a great storage form of energy, our bodies have evolved to look to carbohydrates as the primary source of energy, as it is quick and efficient to convert into a useable form.”

Simple, then, right? Complex carbohydrates form the best source of energy, and should be piled high on your plate. Well, don’t be so hasty…

“Then we have the micronutrients (vitamins and minerals we need in small amounts) that are essential to the energy production pathways and that play a role in preventing fatigue,” Travers says. “Hello iron (which carries oxygen around the body to all the organs including the brain), and vitamin B12 (which works alongside iron to regulate a healthy system).” Finally, there are those foods which create the illusion of energy, but aren’t actually offering our bodies much of anything useful (fast food, we’re looking at you). “We also feel like we have more energy by taking stimulants such as caffeine, although there is no actual energy in caffeine,” says Travers, putting a dampener on your morning espresso. “Plus, staying properly hydrated, while it has no calorific value, has a profound affect on how tired or energetic we feel.”

Got it? Just about? Good. Then let’s look at some specific examples to pack out your lunch box…

A Menu With Mileage: The Best High-Energy Foods

If you’re looking to re-work your energy intake, these foods are solid firestarters, whether it be in the gym, the office, or your sickbed…

1. Porridge – “A nice big bowl of porridge will set you up well for the day,” says Head. “Oats are a great source of complex carbs and so provide us with a prolonged, steady energy release. Top it with honey, a moderate glycemic index food, which enables blood sugar levels to be maintained at consistent levels.”

2. Dark chocolate – “The polyphenols in dark chocolate are thought to dilate blood vessels, which is great for maintaining healthy blood pressure, but also helps the oxygenated blood get around the body more efficiently, thereby feeling your muscles, brain, and organs more efficiently,” says Travers. 3. Lean chicken – “True, it might not be the first thing you think of when it comes to ‘energy foods’, but bare with me,” McNiven says. “Eating protein helps you to feel full, but it can also boost your brain function and help you to feel more alert. As a mid-day meal choice, lean chicken will give you a much needed afternoon energy boost.”

4. Edamame beans – “They’re rich in protein and fibre, a great combo for a 3pm pick me up!” Head advises. “Plus, both protein and fibre promote satiety, bridging the gap between lunch and dinner.”

5. Chia seeds – “These little seeds provide you with a stable source of energy thanks to their ratio of protein, fats and fibre,” enthuses Wiener. “They’re also low carbohydrate, so wont cause spikes in blood sugar or insulin levels which can leave you feeling tired and craving sweet foods later in the day.” 7. Almonds – “As a snack, a handful of almonds takes some beating,” enthuses McNiven. “They’re full of manganese, vitamin B2, and copper which are essential for energy production. An ideal snack whenever you’re flagging.”

8. Sweet potato – “Sweet potato does has more naturally occurring sugar than white potato,” says McNiven. “But where it really wins is its ridiculous amount of immunity-boosting vitamin A, which makes it a great pick-me-up when you’re feeling too rundown to train.”

9. Eggs – “Eggs are rich in leucine, an essential amino acid that helps the body use energy and aids muscle recovery after exercise,” explains Wiener. “Eggs are also high in protein, providing sustained energy over a long period of time which doesn’t affect blood sugar or insulin levels. Lastly, eggs are rich in B vitamins, including vitamin B1, vitamin B2, vitamin B6, folic acid and vitamin B12.” 10. Oranges – “They’re not the only fruit, but they are known as a high-energy food packed with both Vitamin C and natural sugars,” says Wiener. “Both are thought to help reduce fatigue. Oranges also contain potassium and folate, providing your body with a steady source of energy over time, helping you to avoid a sugar rush.”

11. Mushrooms – “These fungi are a rich source or iron, which is essential for helping your body to transport oxygen around your body,” explains McNiven. “Without an efficient oxygen supply, your body can start to feel fatigued and low on energy. Mushrooms also contain enzymes and compounds that act as natural insulin and help in breakdown of dietary compounds into simple sugars which are a source of energy for your body.” 12. Minced beef – “Yes, you did read that right; red meat is a good source of iron, without which our bodies can’t transport oxygen around the body,” enthuses Travers. “If organ cells don’t get oxygen, they don’t function well, one consequence of which is fatigue. Iron is one of the few micronutrient deficiencies that is common in the UK. If you don’t eat meat, you can get iron from beans, lentils and dark green leafy veg.”

13. Brown rice – “This is ‘energy food’ 101, but for good reason,” says McNiven. “It contains far fewer calories than white rice, but as it’s packed with much more fibre, it takes a lot longer to be broken down, meaning its energy supply will last for longer. The high fibre content means you’re also less likely to stuff yourself, eating just the amount you really need for energy.”

14. Coffee – “Your flat white suppresses the calming neurotransmitters in the brain which gives the feeling of being alert,” says Travers. “This works quickly too, with the peak caffeine effect at 20mins after consumption. It’s worth noting though that not everyone responds to caffeine in this way, and it isn’t a long-term fix. We’ve all heard of the ‘caffeine crash.’” 15. Bananas – “The natural sugar in fruit makes it a great, natural energy food which can provide a quick energy boost and help keep bloody sugar levels steady, thanks to the amount of fibre it contains,” says McNiven. “One of the best fruits for energy is bananas, as they’re mainly made up of fibres and sugars including sucrose, glucose and fructose, as well as being rich in potassium which can also enhance energy levels.”

16. Wholemeal bagel – “For a pure carbohydrate hit with a low calorie intake (and around 7g of fibre in a typical wholemeal bagel), this is a good way to start your day right,” says McNiven. “The slow release energy in the wholemeal variety will also keep you full until lunch, meaning you won’t have to stock up on less useful carbs, such as glucose.”

17. Fruit and nut bars – “These are great intra-workout snacks for endurance sports,” says Head. “Dried fruits are almost completely made up of glucose, a simple carbohydrate that is easily burned by muscles as fuel during exercise. Dates have the highest glucose-to-volume ratio of any fruit making them the perfect base for a mid-ride snack.” 18. Quinoa – “As well as containing more protein than any other gran, quinoa is also rich in amino acids, meaning that it can provide you with energy,” says McNiven. “Best of all, quinoa is also high in folate, magnesium and phosphorus, making it a nutrient-packed source of carbohydrate which provides the body with long lasting energy.”

19. Protein bar – “The best diet is three meals a day with healthy snacks as needed,” advises McNiven. “For a shot of energy around a training session, a protein bar can be a good option as it is full of protein and carbs. But make sure to check the sugar and fat content as too much of either is not helpful.”

20. White toast with jam – “Not just tasty, this snack is high GI, meaning it provides a quick release of energy and will help to replenish glycogen stores post workout,” advises Head. 21. Isotonic drinks – “Effects vary from brand to brand, but in general, sports drinks deliver glucose and electrolytes into the blood stream,” explains Travers. “In doing so, they rehydrate our bodies, and provide quick-release energy which is perfect for during or straight after exercise. Don’t drink one and sit around at your desk though, as it’s likely to cause a sugar spike followed by an energy crash.”

22. Water – “It isn’t exactly a food, but adequate hydration is the simplest way to boost your energy,” advises Wiener. “Those who are dehydrated will experience a lack of energy amongst other things like headaches or light headedness, all of which can negatively impact performance at the office, and at the gym.” 23. Salmon – “As well as being packed with brain and heart-protecting omega-3 fatty acids, salmon is also rich in protein, vitamin B6, niacin, and riboflavin, which help your body to convert food into all important energy,” says Wiener. “Plus, it’s packed with protein, which is essential after any workout.”