The most versatile tailoring known to man
By FashionBeans Editors

For the savvy, minimalist dresser, a blue suit is all the tailoring you need. The same two-piece you get married in can, with some clever styling, also work for job interviews, smart-casual days in the city, and date night.

Why is a blue suit more versatile than others? It’s not as harsh as a black suit, nor as sombre as grey one. It flatters all skin tones and pairs with basically everything on the colour wheel.

More importantly, depending on the styling, the blue suit is a chameleon. It absorbs the properties of what it’s worn with to project different versions of the man wearing it: you can be sartorial, corporate, dandy and casual.

The perfect shade is deep but not too dark: aim for something a degree or two lighter than navy. Avoid shine and look for some gentle texture – a mid-weight wool would be ideal. Once it’s tailored, marvel at how much of your existing wardrobe will go with it. Starting with these 12 outfits… 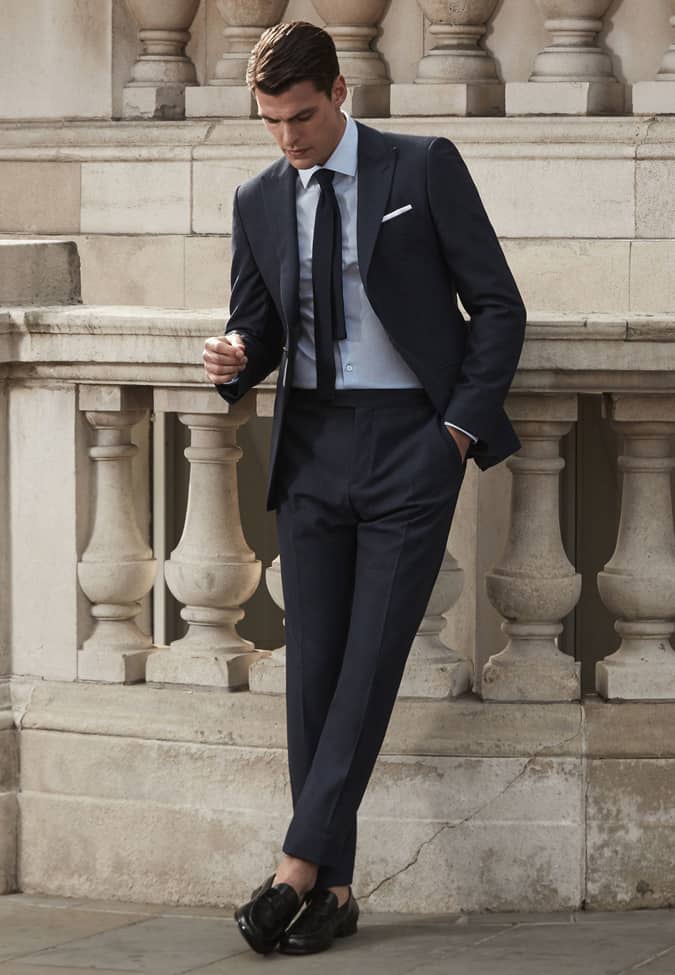 Every office has that guy who wears a suit like a complete boss. (Ironically, it’s rarely ever your actual boss.) Far from having access to top-secret information or a personal stylist, this menswear messiah simply knows the easiest ways to look good — like tonal outfits that take the guesswork out of getting dressed in the morning.

Slip a light blue dress shirt under your navy suit, knot up in a dark blue tie and finish with a pair of black derbies or loafers. Congratulations, you’re now that guy. 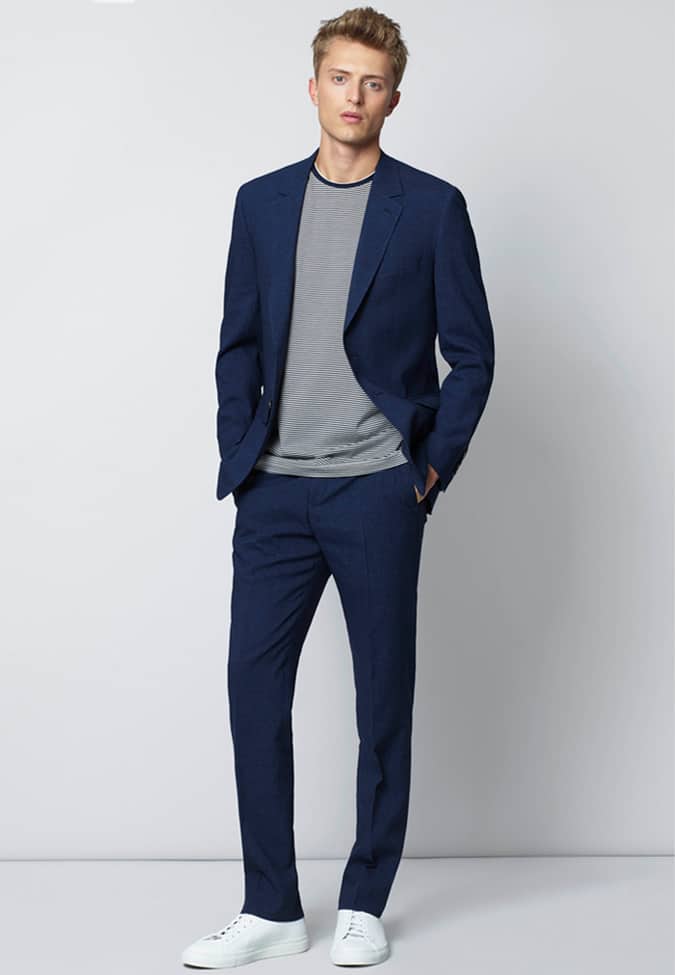 Tailoring has long had symbolic status as the uniform of the working man. Outside of the boardroom, few put in the hours like sailors — particularly French mariners in Brittany during the 1850s — making the Breton top a worthy cabin mate of the navy suit.

Traditionally finished with 21 stripes (each to mark one of Napoleon’s victories), pick out the base colour of the T-shirt with a pair of minimalist sneakers, and swerve any other maritime menswear (like pea coats or neckerchiefs) to avoid sailing into novelty territory. When it comes to wearing a suit, there are very few rules still carved in stone. Sure, it should fit perfectly, be buttoned correctly and be the right fabric for the season, but as for styling — almost anything goes. That includes adding a much-welcomed pop of colour to a navy suit in the form of a contrast T-shirt or knitwear.

Though not technically a neutral, blue works with almost any shade on the colour wheel. Try variants of yellow, green and purple based on the season (mustard, khaki and wine work better in winter, for example) and keep the rest of the look simple. Business-casual outfits don’t get easier than this. A crew neck knit softens your tailoring and lets you play with colour in a way that your shirt rotation never will. A plain merino keeps things sharp but you can also add a gentle rib or cable-knit for extra texture.

Fellow neutrals like greys and creams work well but you can also try something bolder like sage green or the burnt orange above. Slip a neutral tee or Oxford shirt underneath in case you lose the thermostat battle at the office. Wildly popular in recent summers, the Cuban collar shirt gives your suit a little Tony Montana attitude (even if you work in insurance). Bold patterns are common on this type of shirt but we’d recommend keeping the colour palette as neutral as possible, especially if you’re thinking about wearing it to work.

A light blue or off-white is your safest bet, tucked if possible, although some Cubans are cut shorter and boxy. When you have the jacket on, the splayed shirt collar will be competing with your lapels so tuck it under to avoid having to reset it every 20 minutes. Look, ma, no collar. Which means no tie, either. Which means, of course, dressed-down suiting by default. That’s not to say this look isn’t sharp as a tack – the Peaky Blinders and Scandi minimalists have turned the grandad collar shirt from something slobbish to something sartorial.

Again, neutrals are preferable, with white offering a brilliant foil to the darker tailoring. Finish the look with some casual footwear, such as suede Derbies or minimalist sneakers. It tells you something about how far tailoring has come that you can now tuck some loungewear under your blazer without it looking off. The Henley shirt – more often worn these days with jersey shorts for a six-hour Netflix binge – is nevertheless more than capable of dressing up.

It’s basically a collarless polo shirt so bestows a little Riviera nonchalance to your blue suit. Just make sure it doesn’t have ketchup stains from the Stranger Things all-nighter. If you have a crunch meeting in the city, your blue suit doesn’t get more corporate than this. Still synonymous with Wolf Of Wall St types from the ’80s, a blue and white banker-stripe shirt means business in every possible sense.

You can play that down with less formal shoes or by ditching the tie, but for the full greed-is-goof effect, add a Windsor knot, quiff hairstyle and horn-rimmed glasses. For most occasions these days, a three-piece suit could invite accusations of overdressing. Unless you’re reaching for a dinner jacket, this is as formal as your tailoring probably gets, the addition of the waistcoat literally adding an extra layer of formality.

Assuming you’re not a football manager, roll it out for winter weddings and the stuffiest of board rooms only, and don’t mess with formula. Keep the shirt white, the tie dark, the shoes shiny. Although once considered boring and lacking in creativity, tonal dressing is one of the easiest ways to mix up your tailoring. With more formal shirting, simply swap in a dark blue cotton shirt, in a shade similar to the suit, to complete the look.

This is a look perfectly suited to business occasions or office dress, and has a whiff of Bond villain about it – perfect for transitioning to a swanky cocktail bar after the 9-5. Contrary to popular belief, blue and black can, and should, be worn together. After all, black shoes have long been acceptable to wear with blue tailoring, so why not extend the invitation to other garments?

A black tee is an ideal accompaniment to a navy suit, especially when worn with black Derbies or boots. The two will complement each other and instantly help to dress down the look. A classic business look. A deep navy suit worn with a crisp white shirt and mid-to-light grey tie is a failsafe office look. It’s important to pay attention to the details here – the tie knot, the way the pocket square sits and the fit of the suit are all essential in nailing this combination.

It’s worth noting that business dress can also quickly go wrong if you don’t have appropriate grooming habits. A sharp haircut, shave or beard trim are necessary if you want to look truly sharp, and well conditioned skin and neat, short fingernails are a must. There’s no point in dressing the part if you don’t look the part.