While Kendrick Lamar, the man Travis Scott supported on his monolithic Damn tour, is the undisputed king of hip-hop at the moment, rapper Scott is certainly head of the genre’s fashion department.

Set to release one of the most hotly anticipated albums of the year this week and with a US number one album already under his belt, the profile of the 26-year-old Texan transcends his chart-topping music. A high-profile relationship with the youngest ‘self-made’ billionaire ever, Kylie Jenner, is the main culprit but an obvious and burgeoning sense of style has also helped seen Scott conquer the fashion world.

A regular on fashion week front rows Scott has collaborated with Helmut Lang and London-based label Maharishi (the guy does love a good cargo pant and Maharishi practically invented the style) as well as being the face of Saint Laurent for its SS17 campaign.

So what is it about Travis Scott’s style that has seen him courted so prolifically by fashion designers the world over? Well, besides his undoubted influence on youth culture (the guy has over 10 million Instagram followers) his style is also a unique twist on streetwear that impresses at nearly every turn.

A plaid overshirt is a nailed-on go-to, as are the previously mentioned cargo pants that show off his grunge leanings. Scott doesn’t go for traditional tailoring, so if you do catch him in a blazer it will usually have some rock and roll stylings to it like a tight cinch the waist and some gold buttons. On the feet, Scott favours either a pair of Vans or some high tops, styled with the shoelaces undone of course.

Don’t Look At Me

How do you dress all in black without looking like your playing a shadow in the school play? It’s a question asked endlessly in menswear and one best answered with a single word – variation. Different cuts, textures and shades of black therefore play a key role in mixing the look up, while the metallic buttons on the military style blazer links up well with the shiny hoops down the side of Scott’s trousers.

No longer just for Barbie girls and preppy types who spend their summer on Daddy’s super yacht, the colour pink has carved out a substantial space for itself in menswear, especially in streetwear. If you’re going to try the colour take your skin shade into account as a light hue will flush out pale types. Wear pink with summery and fresh colours like white and light blues as Travis does here for a simple and clean cut look. Maybe this image of boxing ledge Mike Tyson in a Supreme T-Shirt on a Supreme T-Shirt (meta) doesn’t have the same historical heritage as Muhammed Ali over a beaten Sonny Liston but in the streetwear game, it is just as iconic. The tee is just right on the sleeves cut off around the middle of the bicep while a simple pair of denim jeans gives Scott full reign to go bling-bling with his watch and accessories. A challenge he is more than equal to. Orange camo is going to be a strong look for anyone, even if you’re a multi-million-selling artist who arrives for your slot supporting Kendrick Lamar on a giant flying animatronic bird. What we’re saying is, it requires confidence, but as long as you know you can add balance to that look by playing the orange off against neutral colours like grey, navy and black then you needn’t be shy. How Do You Do?

Hoodies work great in layering looks, unassuming enough to not draw attention away from your statement bomber jacket, while adding bulk to slim frames. Elsewhere it’s easy to get the wrong shade of blue when pairing with black. A dark navy bruises a look, but a bold electric blue will contrast well with black, made even more effective by the satin and denim differentiation. 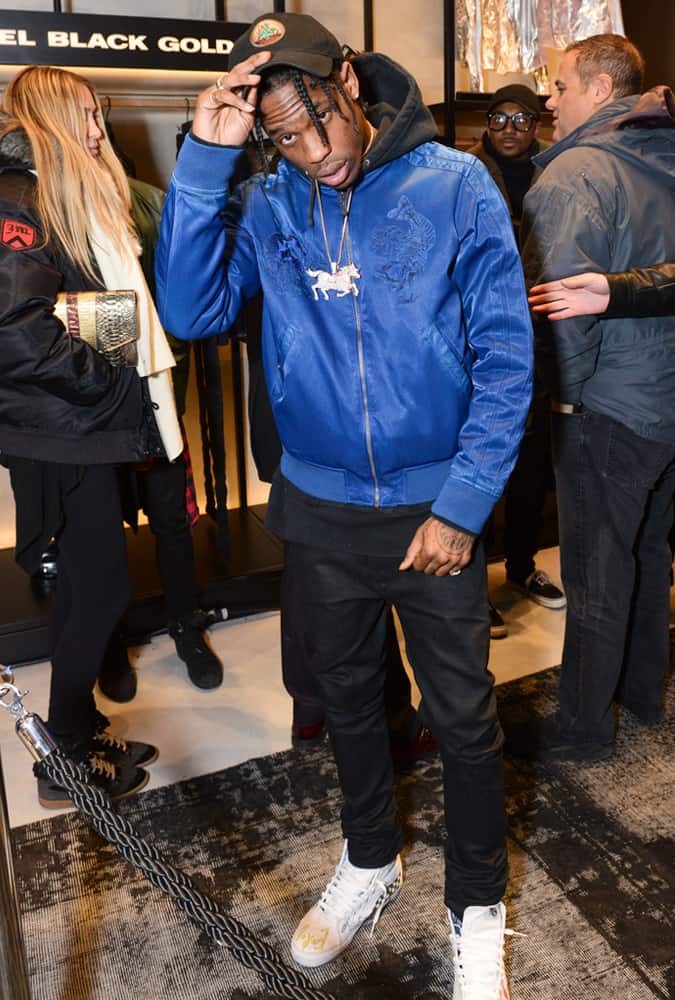 Making his red-carpet debut with Kylie Jenner, at the MET gala, this is a reserved look compared to others on the guest list that night (Black Panther star Chadwick Boseman wore a papal cloak). So although we don’t expect anyone to be walking around the shopping centre in the gothic space captain look anytime soon we do appreciate the straight and sleek cut without a single unsightly bunch and the utility belt strapped on over the shoulder to break up the all-black. The red plaid over-shirt is synonymous with grunge icon Kurt Cobain and there’s more than a hint of the Nirvana frontman in Scott’s version here. The track pants are also giving off strong 1990s vibes and while they are draping over the sneakers the slight opening of the zip allows a little curtain to see the white shinnies behind. 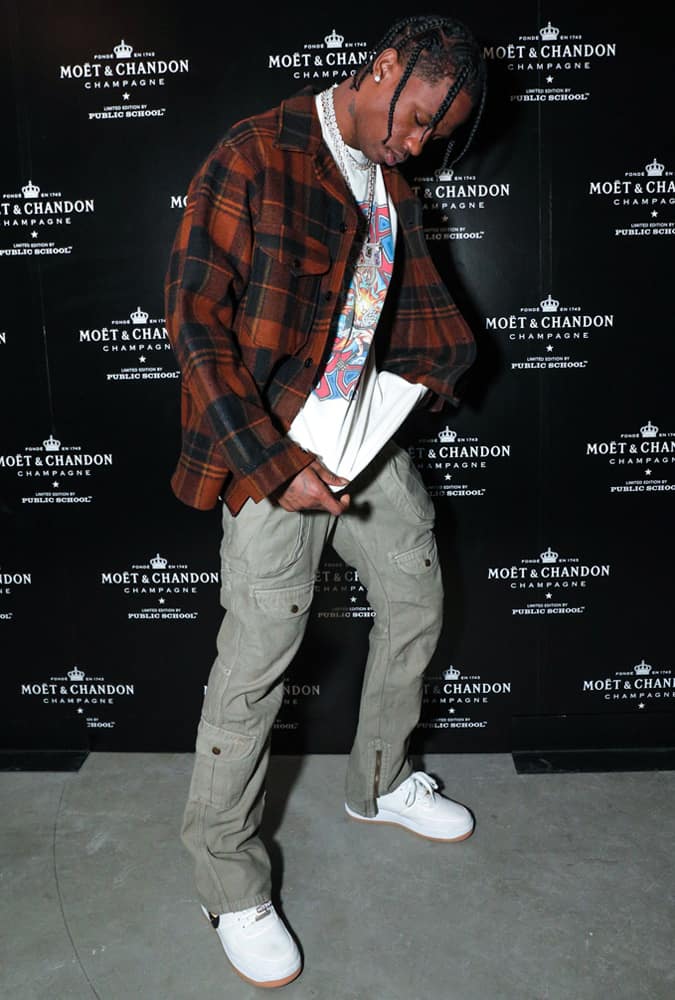 There’s a touch of dad-core in this outfit from Scott which trades heavy on the bright garish colour palette of early 1990s hip-hop. Looser and baggier fits are coming back into play in menswear but you don’t want to look like you’re wearing bedsheets. When it comes to light wash denim especially, make like Scott and go for somewhere in between skinny and loose with a slight taper in your jeans so as not to cover up your favourite Vans. 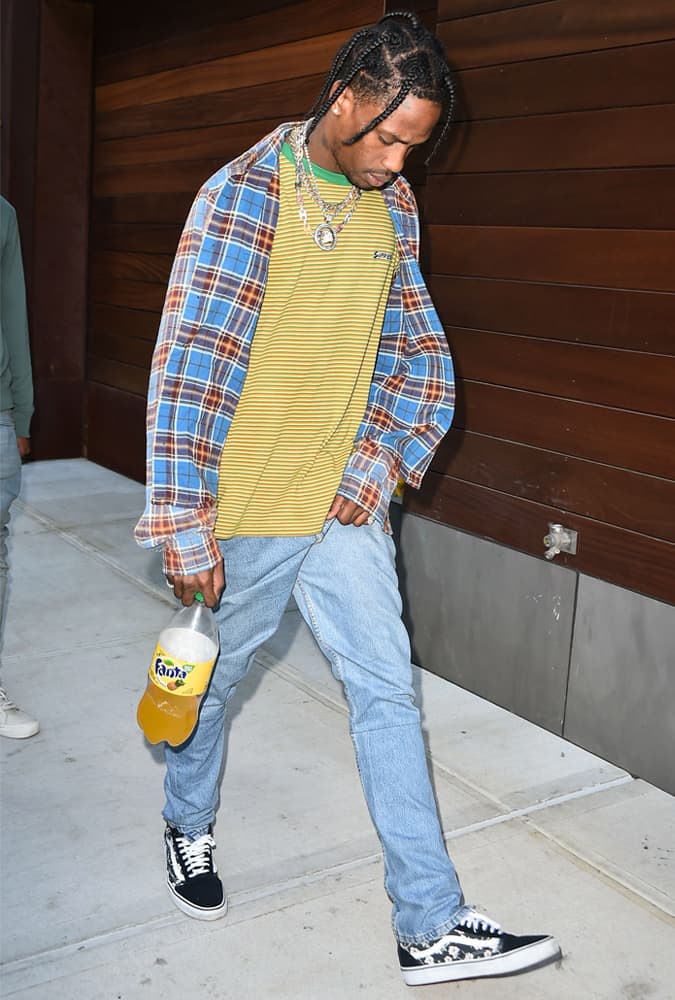 If you’re holding on to the last remnants of your 20s leather trousers are unlikely to be the most forgiving item of clothing to try, but your younger years are a prime time to experiment. There are still some style rules to keep you in check – mainly that all-leather is a sure-fire way to heat exhaustion but the leather trousers paired with the classic and timeless cut on the suede jacket works a treat alongside a non-flashy black tee and white sneakers. Well, you can’t say that Travis Scott isn’t on-brand here and while we’re doubting the practicality of those Supreme shades the grey chore jacket and trousers combo is a utilitarian workwear marvel. The key is to have a relaxed fit – the workwear look is meant to be functional and not in a muscle constricting fit. Elsewhere we’ve done a U-turn and half accepted this whole socks and sandals trend (as has the fashion world at large) but they still look better in high-end options (Scott’s Yves Saint Laurent pair, for example). Do us a favour and wear them neutral, will you? The black bomber jacket has come such a long way in recent years that we reckon any self-respecting man of fashion would be lost without one in the wardrobe. Black is slimming anyway but the silhouette of a bomber jacket – cinched in at the waist while keeping a broad shoulder – can be transformative. Obviously so is posture, and while we wouldn’t recommend following Scott indulging in his go-to head-down pose, we can at least admire the varsity jacket stylings on the sleeves and collar and the sky blue coordination between shirt and shoes. 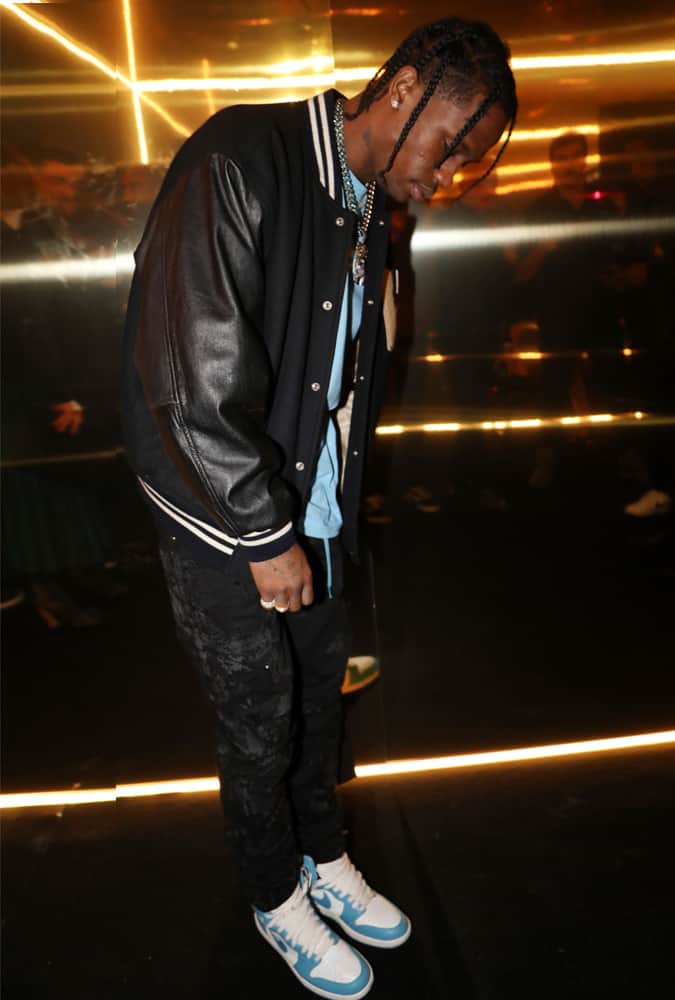 When it comes to the side stripe trouser the look works best when everything else is styled down but if you’re wearing them out put something on up top that you wouldn’t be mistaken for wearing to the gym with a Scott trademark, the chore jacket, working admirably. Also to make sure the stripe is the star of the show pick one with a wide, vertical line and in a rich red contrasting on a navy or black background. 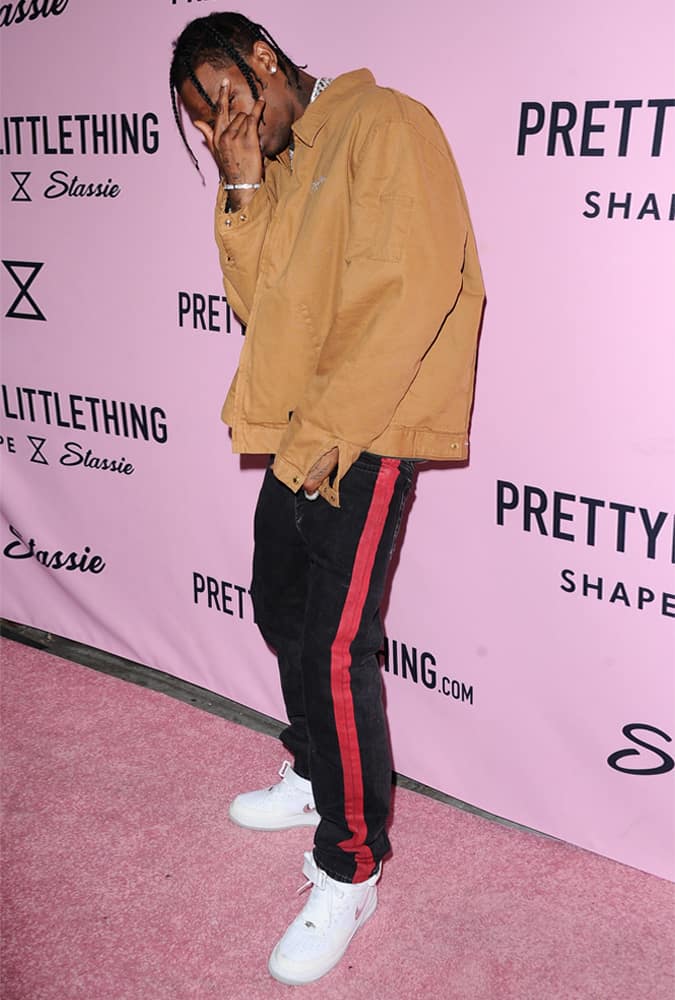 When you’re being squashed into a plane seat for any longer than a second you’re going to want to make sure your wares are comfortable. A sweatshirt is a decent shout whether you’re in economy or first class. The neutral navy also means that should the flying tin can go through any turbulence the food that inevitably spills over you won’t show up as much. More proof that white and blue is the king of failsafe colour combos. When wearing flannel or plaid you want the layer underneath to offer some contrast, and it works even better if the tee is cut to the same length as your overshirt, like Scott has done here. A baggy tee spooling over will look messy, especially if you choose some casual trousers down below. 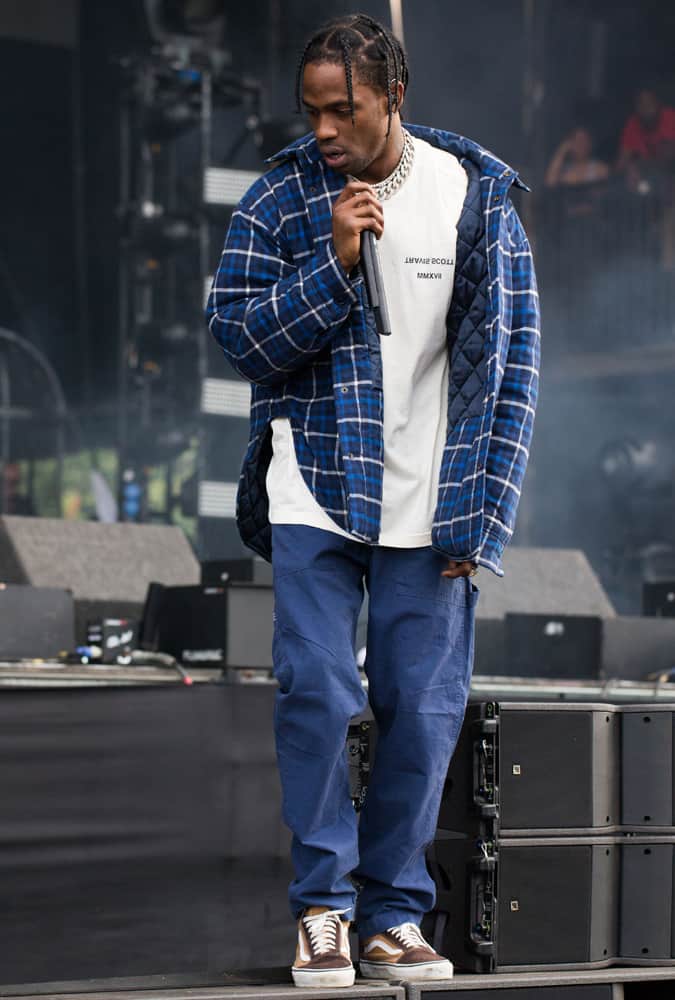 The sweatshirt has had a sophisticated overhaul in recent years thanks to luxury fashion houses realising its dominant influence in streetwear. Understated versions still look the most refined though and this slim cut grey sweatshirt looks clean and tidy with the slender ripped black jeans, so all eyes are on Scott’s prized Jordans. Being Superman, there’s some expectation placed upon the extra-wide shoulders of Henry Cavill, an action hero who has mastered the art of both dressing...