Tye Sheridan joined the ranks of Tom Hanks and Harrison Ford earlier this year, as he became a Spielberg lead in blockbuster Ready Player One, and now he’s leading the best-dressed-men pack with a smooth take on Riviera style. A white short sleeved shirt is a failsafe move as long you get the cut right on the sleeves (mid-bicep) and the hem (just below the waistband), allowing Sheridan to splash a bit of colour into the trouser department. There Jeff Goldblum is again flashing the gnashers and the timeless sartorial style with dashes of popping patterns. It’s a look we’ve come to expect from the Hollywood legend, and one you’d do well to ape, allowing you to bring in the more statement pieces of your wardrobe like Goldblum’s arty shirt into an everyday suited and booted look. Love Island‘s Eyal Booker (and subject of a recent FashionBeans photoshoot) might not have won the show or found love on the Island but he’s certainly won out against his housemates when it comes to style – no muscle fit tees here. Pinstripes are a bold and eye-catching way of mixing up your trouser rotation, elongating those pins to Victoria’s Secret length, but style carefully with a white tee and let the stripes do all the talking. Former Doctor Who man Matt Smith has a rock and style combined with timeless menswear staples that we’ve shipped since before Smith picked up the sonic screwdriver. Unbuttoning a double-breasted jacket is a rogue move though, but Smith keeps himself tidy underneath with a sharpening T-shirt tuck and a trouser crop to keep the silhouette looking clean. Where: Made In America Music Festival, Philadelphia

Pushing the limits of pattern this week is rapper Pusha T (the T stands for Terrence) making sure he stands out on stage in the multi-motif jumper like a modern-day technicolour dreamcoat. As we saw with Goldblum earlier though you don’t fight pattern with pattern, just go with some neutral coloured khakis instead. John Krasinski sailed into our hearts as the loveable Jim on The Office, before casting himself off as one of the coolest creatives in Hollywood. No longer the office clown, Krasinski is all Hollywood leading man material now, which is presumably what his tidy Carhartt bomber jacket is made out of paired nicely with some tapered burgundy trousers. You see all this streetwear rocking about the place – well it all started with this man, Dapper Dan, whose outlandish designs practically defined hip-hop style since the 1980s. Not one to forego his reputation Dan rocks the glitter diamante mainly by keeping the motif up from his oversized shades to his studded monk strap shoes and knowing that a pair of black trousers to balance the lookout is the only way to truly sparkle. Where: GQ Men of the Year Awards, Tate Modern, London

If the catwalks of June were anything to go menswear tailoring is edging ever further away from its traditional triage of blue, black and grey. Another case in point is this fine pastel green creation as worn by Black Panther star Chadwick Boseman, and when the suit is doing the shouting for you all that’s left to do is pair it with some neutralising white sneakers. 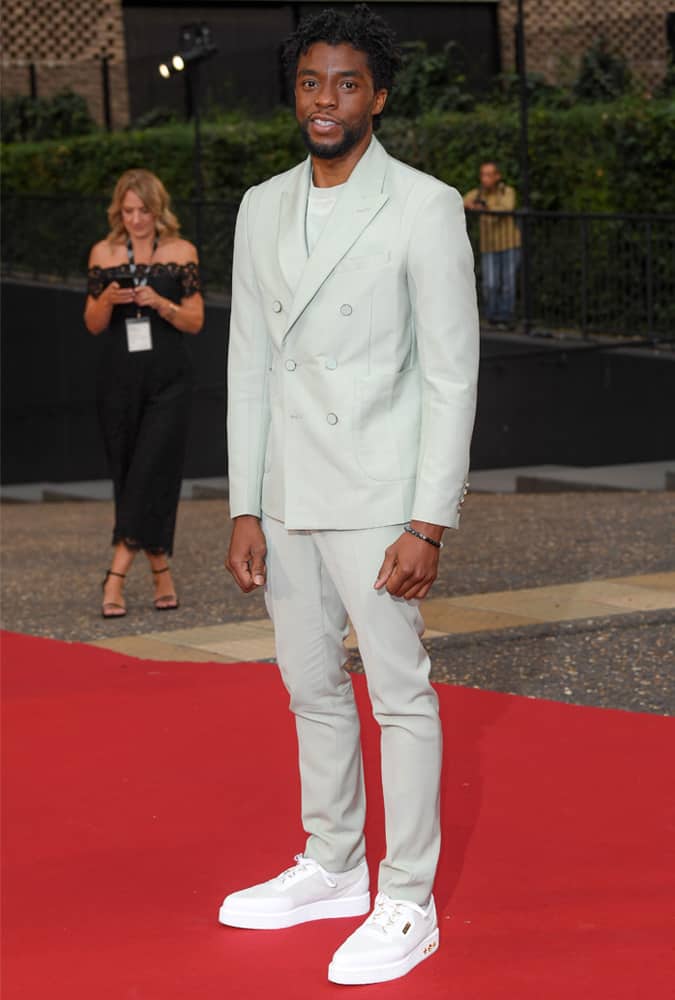 Where: GQ Men of the Year Awards, Tate Modern, London

When does international model and menswear tour de force David Gandy not bang a tailoring look out of the park? Never, that’s when, and so once more let’s marvel at the sharp lines on his double-breasted suit, with an ice blue shirt underneath to cut through the colour and a fetching textured bow tie from Chester Barrie to bring the look home. The irrepressibly cool Luka Sabbat makes slouchy casual wear look like high fashion in a way not many others can. Wide leg trousers have returned big time this year but it’s best to wear something more fitting up top for the contrast, while Sabbat’s shimmering necklace elevates the all-black-everything to menswear hall of fame status.